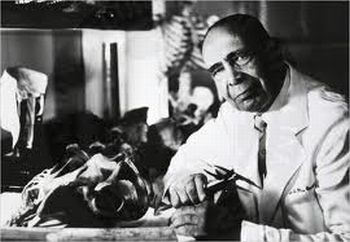 William Montague Cobb was born in Washington, D.C. October 12, 1904. He earned his B.A. from Amherst College in 1925 and continued his research in embryology at Woods Hole Marine Biology Laboratory in Massachusetts. Cobb then went to Howard University, and earned his medical degree in 1929. Cobb was given an offer by Howard to “name a position” he wanted to teach. He chose the newly emerging discipline of physical anthropology (human evolutionary biology, physical variation). Before setting up his own lab, Cobb went to Western Reserve University in Cleveland to study under T. Wingate Todd, a progressive leader in the new field.

In 1932 Cobb returned to Howard as a professor of physical anatomy, where he continued to teach until his death in 1990. A prolific writer, he authored 1,100 articles on a variety of physical anatomy topics and issues relating to African American health. Cobb is considered to be one of the most influential scholars in physical anatomy. To Howard, he left a considerable collection of more than 700 skeletons and the complete anatomical data for nearly 1,000 individuals.

One of Cobb’s most well-known articles was “Race and Runners” which appeared in 1936. He sought to refute the idea that Jesse Owens, a quadruple gold medalist in the 1936 “Nazi” Olympics, was superior because of African Americans’ innate physical prowess that corresponded to a decreased intelligence. Cobb used countless measures of different physical attributes involved in running and jumping and showed that there were no significant differences due to race.

Cobb continued to apply his science to social issues, showing how racism was harming African American health and thus negatively impacting all American society. He initiated the Imhotep Conferences on Hospital Integration in 1957. This annual conference sought to end hospital and medical school segregation and continued until 1964, when the Civil Rights Act was passed. Cobb also provided expert testimony to Congress on health care legislation, culminating in the passage of Medicare in 1965. The epitome of Cobb’s social activism was serving as President of the NAACP from 1976 to 1983.  He was also a member of the Sigma Pi Phi fraternity.