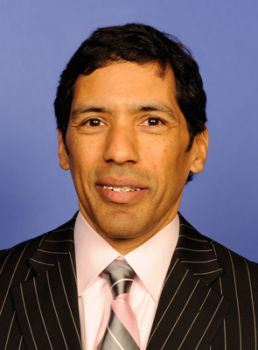 Hansen Clarke is a Democratic politician, lawyer, and artist who represented the 13th District of Michigan in the U.S. Congress between 2011 and 2013.  Born on March 2, 1957 in Detroit, his father, Mozaffar Ali Hashem, was an undocumented Bangladeshi immigrant, and his mother Thelma Clarke was African American.

Clarke grew up on Detroit’s lower east side where, in 1964, his father showed him a picture of Dalip Saund (the first Indian congressman) a year before the representative passed away. Clarke who was eight became interested in politics.  His mother, a crossing guard, raised him with the assistance of food stamps, and encouraged his interest in oil painting. He attended Cass Technical High School and then graduated from Governor Dummer Academy in 1975.  The following year he was admitted to Cornell University on an academic scholarship. During his freshman year, his mother passed away.

While at Cornell Clarke successfully ran for the student seat on the University’s Board of Trustees to defend need-based scholarships to disadvantaged students. He graduated with a B.F.A. with a focus on painting in 1984, and earned a Juris Doctor from Georgetown University in 1987.

Moving back to Michigan in 1987, he passed the Michigan State Bar  and quickly became very active in politics, serving as staff member for the Wayne County Executive between 1987 and 1988 and then as Chief of Staff to Representative John Conyers between 1989 and 1990.  Clarke won a seat in the Michigan House of Representatives in 1990 but was defeated in 1992.  He then served as an associate executive and administrator in Wayne County government from 1993 to 1998 before being reelected to the State House of Representatives in 1998, where he remained until 2003. While he failed in his bids for Detroit City Council (2001) and mayor of Detroit (2005), he became a state senator in 2002 and was reelected in 2006.  During that time he served as treasurer of the Michigan Legislative Black Caucus.

In 2007, he met and married Choi Palms-Cohen, a legal education staffer.  He also visited Bangladesh, his father’s native country, in late December 2007.  His trip was sponsored by the Bangladeshi American Public Affairs Committee to promote goodwill between the U.S. and Bangladesh.

Because of his bi-racial parentage, Clarke considers himself the first Bangladeshi-American in the U.S. Congress, having won election to the House of Representatives from Michigan’s 13th Congressional District in November 2010.  Clarke served on the Committee on Homeland Security and the Committee on Science, Space, and Technology. On March 8, 2012 he introduced HR 4170, the Student Loan Forgiveness Act, aimed at fighting the spiraling rise of student debt.  His bill inspired a million-signature nationwide petition urging Congress to pass the act.

Clarke, a member of Alpha Phi Alpha Fraternity, lost the 2012 Democratic primary for U.S. Congress in the newly drawn 14th district, after refusing to participate in debates.  He cited “race-baiting” by his opponent who questioned whether his deceased mother was actually African American.