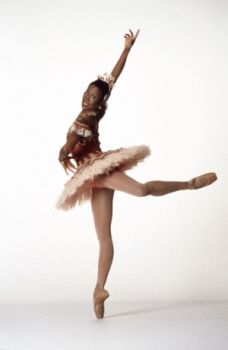 Anderson, an only child, was born in Houston, Texas, on February 19, 1965, to Doris Parker-Morales, a classical piano teacher, and Lawrence Anderson, a high school administrator.  When she was six years old, Anderson’s mother took her to a performance of The Nutcracker.  That performance fascinated Anderson so much that several months later, at age seven, she started training at Houston Ballet’s Ben Stevenson Academy, and in the same year, on December 28, 1972, she performed in that ballet company’s very first production of The Nutcracker.

While attending Lamar High, Anderson continued violin and dance lessons.  During this time she had developed an athletic and muscular body which led Houston Ballet’s artistic director, Ben Stevenson, to tell the teenager that while she was obviously talented and would be great on Broadway in musical theater, her physique prevented her from being successful in ballet.

Competitive and headstrong, Anderson did not follow Stevenson’s advice.  Instead, she set out on a rigorous regimen to reshape her body.  She went on a meatless diet to slim down and took up Pilates, a body conditioning program, to lengthen her muscles.  Anderson developed the elongated, leaner lines that make ballet dancers look taller and more dynamic.  She also continued to study ballet devotedly.  In 1983 Anderson officially joined Houston Ballet as a member, and took her historic leap to principal dancer seven years later.

By the mid-1990s Anderson had now developed an international reputation for her roles in great classical ballets. Her most notable role, however, was Cleopatra, a ballet choreographed expressly for her by Ben Stevenson, who was now her teacher and mentor.

In 2006, at age 41, Anderson retired from the Houston Ballet. Her last dance on stage was in The Nutcracker as the Sugar Plum Fairy, a role she had performed for more than 20 years. Since January 2007 Anderson has taught ballet at the Ben Stevenson Academy in Houston.  She is also a popular lecturer on the subject of ballet, and conducts master classes at area schools hoping to inspire students of all ages and diverse socioeconomic backgrounds.

Anderson has one son, Lawrence Bell Fitzgerald Turner, who was born on April 30, 2003.