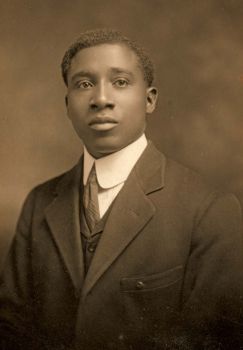 R. Nathaniel Dett
Courtesy of the Library of Congress

Hear a soundtrack specially chosen to enhance your learning about R. Nathaniel Dett (1882-1943)

From precocious five-year-old piano player in the 1890s to internationally known choral director, composer, concert pianist, and poet, R. Nathaniel Dett became champion for preservation of the black spiritual which he called authentic American folk music: He dedicated his life to finding a musical form to bridge the gap between the music’s simple origins and its concert performance.

Robert Nathaniel Dett was born October 11, 1882 in Drummondville, Ontario, Canada, a town founded prior to the American Civil War by fugitive slaves from the U.S.  His early experience included absorbing spirituals his grandmother sang, playing piano in church, and studying piano locally. He then majored in piano and composition at Oberlin Conservatory of Music in Ohio.  In 1908 Dett was its first African American to graduate from Oberlin after winning Phi Beta Kappa honors. His formal education continued throughout his life including studies at Harvard University where his 1920 essay “Negro Music” won a prize. In 1932 he received a Master’s degree from the Eastman School of Music (1932).

In 1911 Dett published his only book of poetry, The Album of the Heart.  Three years later he began touring as a concert pianist and soon after was widely acclaimed by critics.  In 1916 he married Helen Elise Smith, a pianist and the first black graduate of the Damrosch Institute of Musical Art (later Juilliard School of Music.)

After teaching at several black colleges in the South Dett became the music director at the Hampton Institute, Hampton, Virginia in 1913 and would remain there until 1932. His 40-voice Hampton Singers performed at Carnegie Hall in 1914. Later Dett-led choirs gained fame singing across the United States and at the Library of Congress in Washington, D.C. Dett’s choirs performed at the White House before Presidents Herbert Hoover and Franklin Roosevelt.  In 1930 Dett and his choir toured five European countries.

Dett published more than 200 piano, vocal, and choral works. Major chorus works include Chariot Jubilee (an extended motet) and an oratorio, The Ordering of Moses, which was drawn from his master’s thesis at the Eastman School of Music. Popular favorites were Listen to the Lambs (1914), Don’t be Weary, Traveler (1920), and Juba (1920).

Moving to Rochester, New York in 1932, Dett taught privately and led a sixteen-voice chorus for weekly NBC radio broadcasts. He continued to teach at several colleges from 1935 to 1942.

Robert N. Nathaniel Dett died in Battle Creek, Michigan on October 2, 1943 while on tour with a USO Women’s Army Corps chorus. He was survived by his wife and two daughters.