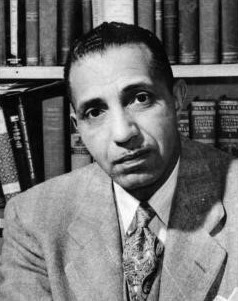 Educator Felton Grandison Clark was born October 13, 1903 in Baton Rouge, Louisiana.  He was the son of Joseph Samuel Clark, the founder and first president of Southern University.  Clark received his early education at the Baton Rouge College.  In 1922 he graduated from the High School department at Southern University and received his B.A. from Beloit College in Wisconsin in 1924.  He later attended Colombia University where he received his M.A. in Educational Psychology in 1925 and his Ph.D. in Educational Administration in 1933.

Early in his career, Clark had several teaching appointments.  He taught at Wiley College in Marshall, Texas between 1925 and 1927, Southern University between 1927 and 1930, and Howard University from 1931 to 1933, before returning to Southern as the Dean of the University in 1934.  In 1938, Clark succeeded his father as president of Southern University, an office he held until his retirement in 1969.

Clark’s long tenure at Southern saw its greatest challenge during the early years of civil rights activity.  On March 28, 1960, seven Southern University students participated in a sit-in at the lunch counter of the S.H. Kress store in Baton Rouge and were arrested.  The next day, Southern students organized more sit-ins, which were subsequently followed by more arrests.  To protest the arrests, thousands of students marched through the streets of Baton Rouge.  The unrest was met by harsh criticism from Louisiana governor Earl K. Long who demanded that Clark take swift and decisive action against the students who staged the sit-ins.  Bowing to overwhelming pressure, Clark suspended 18 students from Southern.  Feeling betrayed, hundreds of students withdrew from the University and two years later, Clark was forced to close the school for a brief period because of the tumultuous racial climate.

Later in the decade, the rift between the students and the Clark administration began to heal.  Clark encouraged several chemical companies to invest in Louisiana and to hire Southern graduates.  He also focused resources on developing and expanding the University’s graduate and professional schools.  Under Clark’s leadership, Southern University prospered.  It grew from a small college with 40 buildings and 1,500 students in 1938 to large public university with satellite campuses in New Orleans and Shreveport.  At his retirement in 1969, the University had more than 11,000 students, making it the largest black university in enrollment in the nation and its annual budget exceeded $12 million dollars.

Dr. Clark was married to Allene J. Knighten.  The couple had no children.  Felton Grandison Clark died in New Orleans on July 5, 1970 at the age of 66.