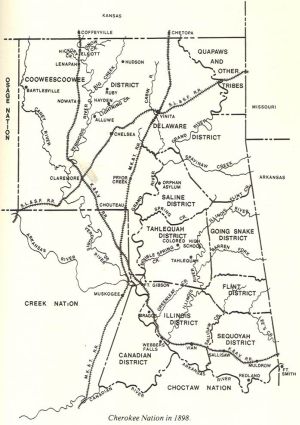 An Act Providing for the Abolition of Slavery in the Cherokee Nation,

Be it enacted by the Natl Council, That in view of the difficulties and evils which have arisen from the Institution of Slavery and which seem inseperable from its existence in the Cherokee Nation, The Delegation appointed to proceed to Washington are impowered and instructed to assure the President of the U States of the desire of the Authorities and People to remove that Institution from the statures and Soil of the Cherokee Nation and of their wish to provide for that object at once upon the Principle of Compensation to the owners of Slaves not disloyal to the Government of the United States as tendered by Congress to States which shall abolish Slavery to their midst; And in case the Government of the United States accede to this propersition, The Said Delegation are hereby Authorized and instructed to enter into an agreement with the Government for the immediate emancipation of all Slaves in the Cherokee Nation and African Slavery shall therefore be abolished and forever cease to exist in said Nation – and therefore it shall be unlawful for any person to hold a Slave within the limits of the Cherokee Nation. And any person who before any of the Courts of the Nation having jurisdiction in the case shall be found guilty of Holding a Slave or Slaves, Shall be fined in a Sum not less than One thousand Dollars __ nor more than Five thousand Dollars. And any Slave So held in Bondage shall be forever free.
So it __, Enacted

That it Shall be the duty of all the Solicitors throughout this Nation to see that this law is strictly enforced within the limits of their respective Districts. And in case any Solicitor shall fail in the performance of his duty in any such case it shall be compelent for Any Citizen to prosecute the case before this proper Court and see that the law is enforced.

And the Solicitor So failing to perform his duty Shall be punished as provided by law in other cases of Similar delinquency. And all Acts and parts of Acts which may Conflict with the above acts, are hereby repealed.

Concurred in Council
With the following Amendment Commencing in the 1st page 26th line after the word (Dollars) And all fines arising from this Act shall be put in the Natil Treasury.