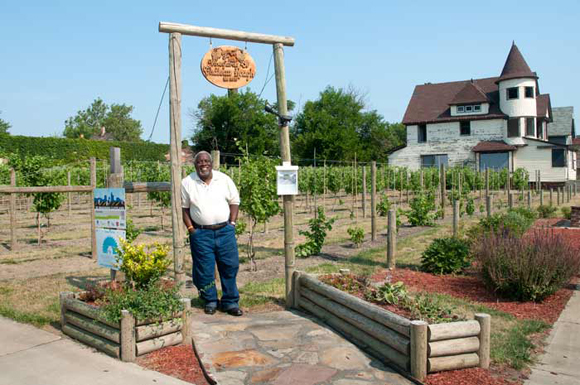 The Vineyard of Château Hough was founded by Mansfield Frazier in 2010 in Hough, a working-class neighborhood in Cleveland, Ohio. This vineyard at the intersection of 66th Street and Hough Avenue, is among the first in America to build upon repurposed land. It is also unique as it serves as a halfway house which employs the home’s ex-convicts through vineyard work. Chateau Hough now grows two winemaking grapes, Frontenac and Traminette, on three quarters of an acre. After a lot of hard work through volunteers, members of the halfway home, and work crews, the first yield produced wine-quality grapes in 2013.

Château Hough is one of the 50 environmental projects for Reimagining Cleveland, an initiative which is focused on changing the city’s vacant lots. Mansfield Frazier, the founder of both nonprofit Neighborhood Solutions and Château Hough, used $8,000 of his own money and the support of a $15,000 city grant to turn the formerly vacant lot across from his house into the vineyard. Frazier is an ex-convict who returned to Cleveland in 1995 after serving time in prison for various crimes. While incarcerated, he began writing and critiquing the prison system and the overall construction of race in America. Frazier has become a leader in the efforts to foster ex-convict re-entry into society.  His own experience has served as a model for successful reintegration.

As a project, Château Hough has a goal that is larger than just producing good, local wine for the city of Cleveland. In 1966, the neighborhood of Hough was nearly destroyed by a massive riot and has yet to shake the negative association. However, under Frazier’s leadership, Château Hough and its community stakeholders are determined to help change the image of Hough.

In 2014 Château Hough began a program to use biocellar, an innovative technology that is seen as an extension of the vineyard. “Biocellar” is a term coined by local environmentalist Jean Loria in 2006. She is a permaculture designer and her “biocellar” is a repurposed basement/cellar of an old, abandoned home that is remodeled into a greenhouse. The structure then uses the heat retrieved from its being below ground level to continue to grow food even in winter. Frazier and Loria have worked together to create the world’s first Biocellar which among other things serves to counteract the neighborhood’s negative image through this unique technological advancement. The first products cultivated by Château Hough’s Biocellar, shiitake mushrooms and strawberries, were chosen because even in the summer they are challenging and expensive to grow.  Funds from their sale will help the non-profit company generate more revenue in this low-income neighborhood. As Château Hough continues to grow and interact with the community, Frazier and his team hope to expand the Château Hough project to create the first inner-city winery.

“About Us,” http://chateauhough.org/sample-page/; David Sax, “How a Winery is Transforming Cleveland’s Most Notorious Neighborhood,” https://www.good.is/features/chateau-hough-cleveland-winery; Michael Rotman, “Vineyards of Chateau Hough,” https://clevelandhistorical.org/items/show/148; Robert L. Smith, “A Man for His Time: Mansfield Frazier Wants to Change His City like He Change His Life,” http://blog.cleveland.com/metro/2010/06/a_man_for_his_times_mansfield.html; Debbi Snook, “Berries and Mushrooms Coming: Innovative ‘Biocellar’ in Cleveland’s Hough Are has Open House Friday,” https://www.cleveland.com/food/index.ssf/2014/10/innovative_biocellar_in_clevel.html; Dave Davis, “World’s First ‘Biocellar’ to be Built in Cleveland’s Hough Neighborhood,” https://www.cleveland.com/metro/index.ssf/2012/11/worlds_first_biocellar_to_be_b.html; Caroline Rolf, “The World’s First Biocellar Could be the Start of the Urban Renewal Cleveland Needs,” http://theplaidzebra.com/worlds-first-biocellar-start-urban-renewal-cleveland-needs/.