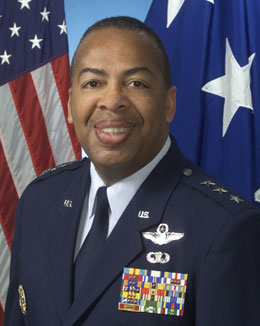 Retired Lt. General John D. Hopper was born in Clarksville, Tennessee in 1947. He attended Lyndon McKinley high school in Columbus, Ohio and entered the Air ForceAcademy in 1965.  In high school, Hopper was an avid high school athlete, involved in basketball and track, but at the Air Force Academy in Colorado Springs, Colorado, he failed to make any athletic team and instead concentrated on his studies.

Graduating from the Academy in 1969 with a B.A. in general studies Hopper was assigned to a pilot training program at Laughlin AFB, Texas. Upon certifying as a pilot in 1970, he was sent to Ching Chuan Kang Air Base in Taiwan to fly C-130s in the Vietnam War. Returning to the U.S. after his one-year rotation was done, Hopper was assigned to Vance AFB, Oklahoma as a T-37 instructor pilot and class commander for the 71st Flying Training Wing. In 1974, he became a distinguished graduate at Squadron Officer school at Maxwell AFB, Alabama.

In 1977 Hopper graduated from the Air Force Institute of Technology School for Systems and Logistics at Wright-Patterson AFB, Ohio with a Master of Science degree in logistics management. Upon graduation, he became the Deputy Director of Cadet Logistics at the Air Force Academy. In 1981, he once again returned to school at Air Command and Staff College, Maxwell AFB, Alabama and by 1984, he became the chief of the Wing Command Post of the 438th Military Airlift Wing at McGuire AFB, New Jersey and then commander of the 438th Field maintenance Squadron there in 1985.

In 1988 Hopper became the Chief of the Exercise division at Headquarters U.S. Forces Command, Fort McPherson, Georgia and two years later he served as the Deputy Commander of Operations for the 63rd Military Airlift Wing, Norton AFB, California. For a short period during the first Gulf War, he was also Commander of the 1660th Tactical Airlift Wing (Provisional) at Thumrait, Oman.

In 1991, Hopper was Commander of the 89th Operations Wing at Andrews AFB, Maryland and served in a similar capacity over the 63rd Airlift Wing at Norton AFB, California in 1992, and the 375th Airlift Wing out of Scott AFB, Illinois. He was promoted to Brigadier General on July 15, 1994.

In 1994 Hopper became Commandant of Cadets at the U.S. Air Force Academy and two years later he was Vice Director for Logistics of the Joint Staff at the Pentagon in Washington D.C. After serving as Director of Operations at Headquarters Air Mobility Command, Scott AFB, Illinois, he in 1999 took command of the 21st Air Force at McGuire AFB, New Jersey. His final station was as Vice Commander of Air Education and Training Command at Randolph AFB, Texas in 2000.

Hopper was promoted to Lieutenant General on January 1, 2001, making him the highest-ranking African American in the U.S. Air Force at the time. He finally retired in 2005. Currently he is the CEO of the Air Force Aid Society, an organization dedicated to helping current airmen and their families.