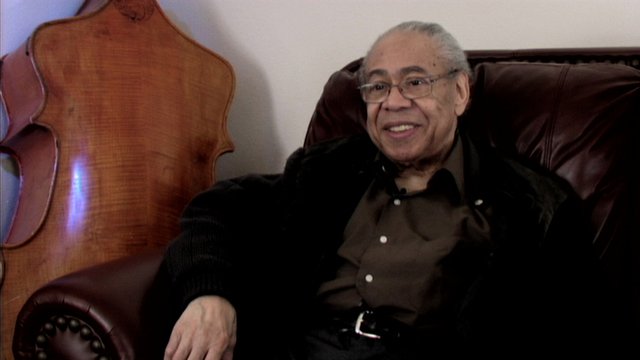 Buddy Catlett was a solo jazz multi-instrumentalist but is known for playing the bass. Catlett was born in Long Beach, California on May 13, 1933. He moved to Seattle, Washington when he was three years old and lived there most of his life. He came from a family of pioneers, his grandfather, also George Catlett, is said to have settled in Yakima, Washington in 1903.

As a child Catlett lived next door to a jukebox proprietor who introduced him to new music, as well as his mother who always had a love for music. He was first inspired by the music of Louis Armstrong, which he learned to play on the cornet when he was 10 years old. At 14, Catlett got a job at a local Seattle theater to save up money to buy a saxophone. Once he achieved his goal, he joined the Bumps Blackwell junior band in Silverdale, Washington, which included his childhood friend Quincy Jones. Catlett continued to play for the band while he attended Garfield High School in Seattle alongside Jones. However, at the age of 17 he had to stop playing because he developed tuberculosis pleurisy, the worst form of tuberculosis. He was hospitalized for two years but once he was released he started to take bass lessons from Tiny Martin who was a member of the Seattle Symphony.

In 1956 23-year-old Catlett was asked by Horace Henderson to join his band, and tour California and the Midwest. Catlett accepted, moved to Denver, Colorado, and traveled with the band for about a year. In 1958 Catlett moved to New York City, New York, and joined Quincy Jones’s band on a European tour playing for the musical “Free and Easy” starting Harold Nicholas.

Beginning in 1961, Catlett toured with Count Basie for four years, going with the band to Japan and Europe. Then in late 1965, Catlett joined the band of the man who was his childhood inspiration—Louis Armstrong—and performed with him until Armstrong’s death 1971. Catlett toured with other bands until 1978, when he moved back to Seattle permanently.

While he never toured again Catlett continued to play in big bands in Seattle even into the early 2000s. In his lifetime he played on more than 100 jazz records and was a part of Seattle’s Repertory Jazz Orchestra from 2002 to 2011. In 2008 Seattle declared February 2 Buddy Catlett day after adding him into the Seattle Jazz Hall of Fame that year.

George James “Buddy” Catlett died on November 12, 2014 due to heart problems in the Leon Sullivan Health Care Center in Seattle’s Central District. He was 81. He left behind his second wife Rita Pettaway, his brother, Ernie Catlett, his sister Linda Wint, daughter Natalie, and sons Dale and Gregory.