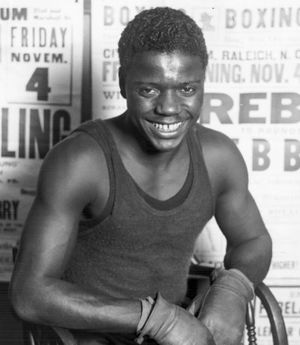 Leslie “Wildcat” Carter was born on December 12, 1909 and migrated to Edmonton, Alberta, Canada with his family as a very small boy.  At fourteen, he and an older sister moved to Everett, Washington.  One year later, at fifteen, he began his professional boxing career in Everett. Exceptionally fast, possessing excellent timing and beautiful footwork, the young featherweight suffered only one loss in his first 25 contests and quickly became known as a real crowd pleaser and a very strong drawing card in the Pacific Northwest.  He also had a significant following in Canada, and later Germany as he boxed all over the world.

Carter’s standard mode of attack was to dance in toward his opponent with his arms flying, throwing short, crisp punches to the head and shoulder from every angle. He was difficult to hit early in his career and was sometimes referred to as the phantom in the newspapers as a result. He was also an accomplished dancer outside the ring, studying dancing under the tutelage of the one and only Bill “Bojangles” Robinson.

By late 1927, Carter was being touted as a coming world champion, and the local press hailed him as “one of the fastest pieces of fighting machinery in the nose punching industry in the Pacific Northwest.” Unfortunately, he suffered a serious blow to his growing reputation when he then suffered three successive losses, including one against an experienced local featherweight named Doc Snell (real name William McEachern) for the Pacific Coast Featherweight title. Carter’s manager claimed that the young fighter was having difficulty making the featherweight limit during this period of time and that the efforts to make weight had cost him in terms of both strength and speed. Ultimately, Carter moved up into the lightweight division, but he never achieved the greatness that had been predicted for him early in his career.

Carter and Doc Snell met a total of nine times in Pacific Northwest rings, with Snell winning seven of the popular matches, drawing once, and Carter knocking him out in the first round of a contest refereed by former heavyweight champion Jack Dempsey. The bouts between the two local men were always lively and guaranteed to draw a good crowd. Carter ended his career with a record of 77 wins, 42 losses, and 15 draws. He passed away on January 31st, 1985.