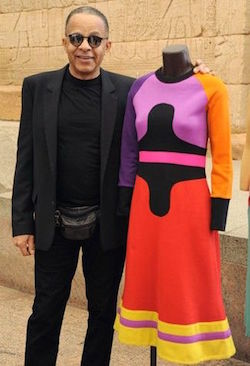 Stephen Burrows with one of his designs

Fashion designer Stephen Burrows was born September 15, 1943, in Newark, New Jersey, to parents Gerald Burrows and Octavia Pennington. He attended elementary school in Newark and graduated from Arts High School in 1960. He then attended the Philadelphia Museum College of Art in Pennsylvania in 1961 but later transferred to the Fashion Institute of Technology in New York City from which he graduated in 1966.

Burrows had learned to sew and make clothes at an early age under the tutelage of his grandmother, Beatrice Simmons. And it was then that he learned to create the characteristic lettuce edging and visible stitch lines that would later make his work iconic in the fashion world. After he graduated from the Fashion Institute of Technology, he was hired as a fashion designer at Weber Originals. He left Weber Originals in 1967 and in 1968 co-founded O Boutique in New York City. The following year, he and fashion colleague Roz Rubenstein launched a ready-to-wear collection from the upscale department store Bonwit Teller.

O Boutique lasted for two years but was forced to close because of Burrows’s lack of business experience. Soon afterward in 1970, Geraldine Stutz, president of Henri Bendel, provided Burrows with a space to work. In the summer of that year, he opened Stephen Burrows World on the third floor of the Bendel Studio where his nonfinito bright jersey knits and his nail-studded leather garments captured the vivacity of the 70s disco vibe. The success of Stephen Burrows World was instant, and Burrows built a star-studded clientele that included entertainment figures such as Diana Ross, Barbara Streisand, and Cher.

In 1973 Burrows left Bendel to found Burrow, Inc. and began working on New York’s Seventh Avenue. That year, he became one of only five American designers to show his work at the Palace of Versailles outside Paris, France. It was on the runways of Versailles that he became the first African American designer to gain international fame, as well as the first African American to win the Coty Award, the highest honor in American fashion. He won the award in 1974 and again in 1977. He was also awarded the Council of Fashion Designers of American Fashion Critics Award and the Knitted Association’s Crystal Ball Award in 1975.

In 1977 Burrows returned to Henri Bendel and joined Pat Tennant, Inc. but left in 1982 and did not return until 1993. In 2002 he reopened Stephen Burrows World on Bendel’s third floor. One year later, he was admitted into the Fashion Walk of Fame, and in 2010 he collaborated on a department store line with the discount retailer, Target. He was honored with lifetime achievement awards from both the Savannah College of Art and Design and the Pratt Institute of Design in 2014.