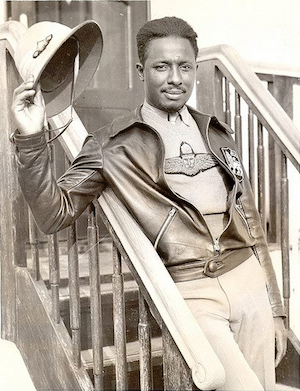 John Charles Robinson, nicknamed the Brown Condor, was an African American aviator who fought with the Imperial Ethiopian Air Force against Benito Mussolini and Fascist Italy during the Second Italian-Ethiopian War, 1935–1936. He is also known as the Father of the Tuskegee Airmen for his contributions to the aviation programs he began at the Tuskegee Institute in Alabama in the early 1940s.

Born in Carrabelle, Florida, in 1903, Robinson and his family moved to Gulfport, Mississippi, where he spent most of his childhood. With a long-time interest in mechanics and machinery, he traveled to Alabama in 1921 to study mechanical science at the Tuskegee Institute. After graduating, Robinson unofficially attended the Curtiss-Wright School of Aviation in Chicago, Illinois where he worked as a janitor until faculty assisted him in becoming the school’s first black student.

In early 1935, when much of the world realized Italy was gearing up for war with Ethiopia, Robinson announced that he would help in the war efforts against the Fascist Italian forces. Robinson noted that Ethiopia was the only African nation to have successfully resisted colonial conquest by European imperial forces in the late nineteenth century. Because of this, Robinson argued, the Italian invasion posed a threat to more than just Ethiopia, but the greater idea of independence in Africa.

With the approval of the Ethiopian government that at the time had only a handful of pilots and planes, Robinson conducted crucial pilot training near Addis Ababa, the capital of Ethiopia. In late August 1935, he was named commander of the Ethiopian Air Force. He commanded a fleet of about twenty Potez 25 biplanes which were however weaponless and used for reconnaissance and supply. When Ethiopia was defeated by Italy in 1936, Robinson escaped and returned to the United States.

In 1924 he and a group of other aspiring African American pilots formed the Challenger Air Pilots Association. These men were later also able to attend the Curtiss-Wright School of Aviation. In an attempt to promote other aspiring black pilots, fellow pilot Cornelius Coffey helped open the John Robinson School of Aviation in Robbins, Illinois, a few years later. Robinson also urged Tuskegee Institute to open a school of flight.

The famous Tuskegee Airmen of World War II accredited John Charles Robinson as one of the founders of their program and an inspiration to all aspiring African American aviators of that era. Robinson’s trailblazing contributions to African Americans in the military paved the way for the eventual integration of the United States Air Force.