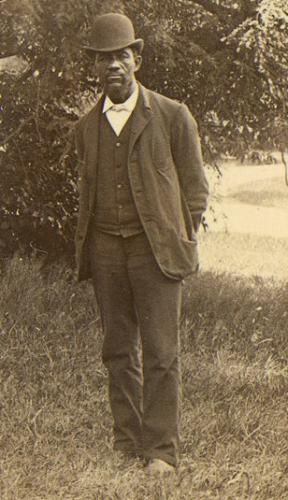 Solomon G. Brown, poet, lecturer, and scientific technician, became the first African American employee at the Smithsonian Institution.  He also played a significant role in the implementation of the first electric telegraph and was well versed in the study of natural history.

Born on February 14, 1829 in Washington D.C., Brown was the fourth of six children born to Isaac and Rachel Brown, both ex-slaves.  When his father died in 1832, the Brown family was left homeless and heavily in debt. Due to this enormous setback, Solomon was unable to attain a formal education.

At the age of fifteen, he began working at the Washington, D.C. post office where he was assigned to assist Joseph Henry and Samuel F.B. Morse on the installation of the first Morse telegraph line in the nation.  Despite his youth, Brown was one of the technicians who helped set up the telegraph line between Baltimore and Washington, D.C.  Brown continued to work for Samuel F.B. Morse for the next seven years.

Beginning in 1852 when Joseph Henry became first secretary of the newly opened Smithsonian Institution, he hired Brown as a general laborer.  By 1864, Brown was a museum assistant, and by 1869, he was the registrar in charges of transportation, registry and storage of animal specimens and materials received by the institution.  He also assisted in preparing maps and drawings for virtually all Smithsonian lectures between 1870 and 1887.  Brown worked under the first three secretaries of the institution.  Correspondence between Brown and Spencer F. Baird (the secretary from 1878 to 1887) illustrate his importance in the operation of the museum.

While at the Smithsonian, Brown educated himself in the field of natural history.  His association with the Smithsonian provided him with a plethora of information, which he passed on to scientific societies in Baltimore, Washington, D.C. and Alexandria, Virginia. In addition to his speaking engagements, Brown dedicated much of his time to poetry.  He participated in readings throughout the Washington, D.C. area, and his poems were published in one of the leading African American newspapers of the day, the Washington Bee.

Brown was also an activist, volunteering in various civic and educational programs aimed at advancing African Americans.  He was a trustee of Wilberforce University in Ohio and of the 15th Street Presbyterian Church in Washington, D.C. He founded the Pioneer Sabbath School in the city and was superintendent of the North Washington Mission Sunday School.  In 1866, Brown was elected president of the National Union League, an important political organization for African Americans across the South.  From 1871 to 1874, he served three consecutive one-year terms in the legislature of the District of Columbia.