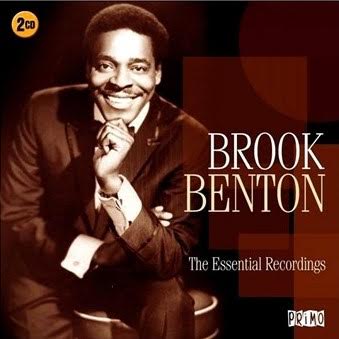 Composer, lyricist, baritone Brook Benton, who sang R&B and ballads, was born on September 19, 1931, in Camden, South Carolina, as Benjamin Franklin Peay to Willie Peay, a United Methodist Minister, pianist, and choirmaster in Lugoff, South Carolina, and Mattie Hill Peay, a gospel singer who taught music to her son.

In 1948, Benton left the south at the age of 17 for Harlem, New York, to search for opportunities as a musician. He sang with several gospel ensembles there, including the Golden Gate Quartet and the Jerusalem Stars and worked various odd jobs. In 1950, however, he returned to South Carolina, where he sang with the Sandmen, a local R&B group.  He then moved back to New York in 1953, this time to sign a solo artist contract with Epic Records.

Benton performed in the 1957 musical, Mister Rock and Roll, produced by Aurora Productions. In 1958 he composed music and lyrics for other vocalists, including “Looking Back” which became a major hit for Nat King Cole, reaching #2 on the U.S. R&B chart. He also co-wrote with R&B singer Clyde McFadden, the latter’s hit recording “A Lover’s Question,” which peaked at #1 on the Billboard Hot 100 chart and stayed on top for 23 weeks.

In 1961, Benton’s “The Boll Weevil Song,” a memorable novelty hit, peaked at #15 for three weeks on the R&B chart. After a five year absence, Benton charted again in 1966 with “Looking Back” which reached #27 on Billboard Global 200 and remained there for seven weeks. Benton’s biggest hit came in 1970 when he released “Rainy Night in Georgia” with Atlantic Records. It rose to #4 on the Billboard Pop chart and remained there for 15 weeks, selling well over one million copies. While he continued to perform, Benton never released another record.

On April 9, 1988, Brook Benton died in Queens, New York, from spinal meningitis complications. He was 56.