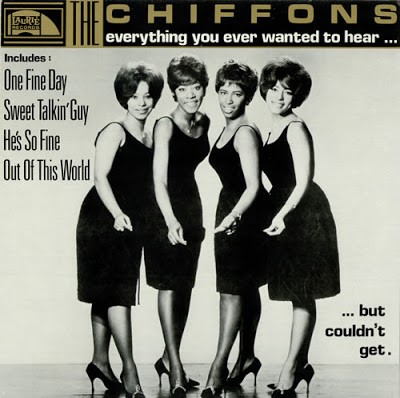 The Chiffons became a quartet in 1963 after adding Sylvia Peterson, who was born on September 30, 1946, in the Bronx. Their first single after she joined the group was “He’s So Fine” which peaked at #1 on the R&B chart and sold more than one million copies. It also peaked at #16 in England. Their first album of the same name reached #97 on the Pop chart. Months later, the group released “I Have a Boyfriend” which peaked at #36 on the Billboard’s Best Seller list and remained on the chart for ten weeks. “One Fine Day,” their next bestseller, reached #5 on the Billboard Hot 100 and peaked at #6 on the R&B chart. It was their first international hit, rising to #6 in New Zealand, #18 in France and #29 in the United Kingdom.

The following year, 1964, the Chiffons were one of the opening acts for the Beatle’s first United States concert at Washington Memorial Coliseum in Washington, D.C. Later that year they opened for the Rolling Stones on their first U.S. tour.

In 1965, the Chiffons signed with the Laurie label and soon after released “Nobody Knows What’s Going On In My Mind But Me.” They performed the song on various dance/music television programs including American Bandstand, Hullabaloo, and Shindig but the song failed to sell 500,000 copies, the standard level for a national “hit” record. In 1966, they released “Sweet-Talking Guy” which peaked at #4 on the Billboard 100 Chart, remaining there for 14 weeks. “Sweet-Talking Guy” was their last million-selling record.

On May 15, 1992, Barbara Lee died from a heart attack at the age of 45. The group, however, continued to perform with new members and founder Judy Craig who returned in 2009 to the group she founded 49 years earlier.