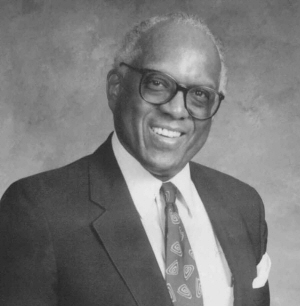 While a student at UCLA, Bridges was drafted into the military in 1952, and was stationed in Japan. While a soldier, he continued to study architecture. He earned his bachelor’s of architecture degree from the University of Washington in 1960.

Bridges began working in Seattle architecture firms while still a student at the University of Washington and received his first job in 1956 as a draftsman. Bridges worked for the architecture firm Gotteland and Kocarski and designed Catholic churches and buildings in Seattle.

After becoming a registered architect in 1962, Bridges formed his own firm, Leon Bridges AIA in 1963. His first project was designing a building for the Seattle YMCA. In 1966, he formed a partnership with colleague Edward Burke and they worked together until 1972 when Bridges relocated his firm to Baltimore.

He was the first registered African American architect in Maryland. He served as National Director of the American Institute of Architects (AIA) where he co-founded the AIA/Ford Minority Scholarship fund. In 1984 he was invested as a Fellow of the prestigious College of Fellows of the AIA.

Bridges is the recipient of more than twenty national, regional and local awards for design excellence including the restoration of Baltimore’s Penn Station and Baltimore City College High School. Bridges is also a member of the counsel of the National Organization of Minority Architects (NOMA), for which he has served in every national office, including president.

Currently, Bridges is a partner in The Obsidian Group, an architectural, design and planning firm with offices in Baltimore, New York and North Carolina.