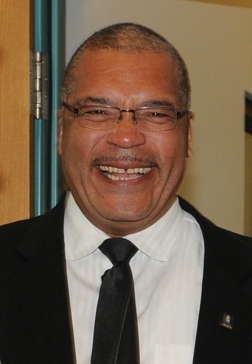 Carl Brewer served as the 100th Mayor of Wichita, Kansas, only the second African American elected to that office. Brewer was born on March 8, 1957 in Wichita, Kansas. He attended Wichita North High school, and graduated in 1975. He obtained his first job at the age of sixteen, working at a local meat packing plant. Brewer went on to attend Friends University, but joined the Kansas National Guard in 1978. In less than six years, Brewer had advanced to the rank of E–7 Infantry Platoon Sergeant. He attended Officer Candidate School (OCS), and was commissioned as 2nd LT. in July 1985. He commanded the Infantry Company, the 2-635th Armored Tank Company, and was a special assistant to retired Gen. James Reiger at the brigade and battalion level. He retired as a Captain in 1999.

Brewer has worked in the aviation industry for over thirty years. Starting in 1985, he first worked at the Cessna Aircraft Company as a production sheet metal assembler, inspector and manufacturing engineer. He then worked for the Boeing Commercial Airplane Group for the next twenty years as a manufacturing engineer and operations manager. Brewer went on to work as an operations manager for new business at Spirit Aerosystems, supervising the team that designed systems for the 787 aircraft.

Brewer began his political career by serving on the Wichita City Council as a Democrat from 2001 to 2007, representing District 1. Brewer challenged incumbent mayor Carlos Mayans and on April 3, 2007, won a landslide 61% to 37% of the vote. Once elected he was required to resign from his post on the city council to take his oath as Mayor. Brewer became the second African American elected to that office, after A. Price Woodard in the 1970s. Brewer served two terms in office as Mayor, from 2007 to 2015. During his term, Brewer served as the President of the Kansas League of Municipalities, and was appointed by President Obama to represent Kansas on the Immigration Task Force.

Carl Brewer is a member of numerous governmental associations, including the National League of Cities Board of Directors, the National Black Caucus, the Regional Economic Area Partnership (REAP), Bloomberg’s Mayors Against Illegal Drugs, and the U.S. Conference of Mayors. He is also a member of multiple organizations, including the Arkansas Valley Masonic Lodge, the African American Catholic Council, the National Guard Association, and the Boeing Management Association. Brewer has also received a number of distinguished awards. In 1995, Brewer was presented the Citizen of the Year Award by from the Gamma Upsilon Chapter of Omega Psi Phi Fraternity. He was honored as the National Association for the Advancement of Colored People (NAACP) Person of the Year in 2005. In 2008 he was given a Distinguished Political and Civic Leader Award.

In 2013 Brewer started his own company, Brewer’s Specialties LLC, focused on his Best Bar-B-Que Sauce and has returned to working with Boeing/Spirit. In 2017 Brewer campaigned for Governor of Kansas but lost in the Democratic primary in August 2018 to Kansas State Senator Laura Kelly.

Carl Brewer died in Wichita on June 12, 2020 at the age of 63.  He is survived by his wife Cathy, two daughters, Cheryl and Carol, two sons, Jason and Carlo, and thirteen grandchildren.