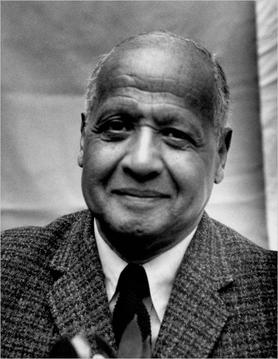 Roy Rudolph DeCarava was the first African American to receive the Guggenheim Fellowship. Born on December 9, 1919 in Harlem Hospital, New York City, New York, DeCarava was the only child of a Jamaican mother and American father, who separated when he was young.

In 1938 DeCarava graduated from high school in the Chelsea section of New York and studied art and architecture at the Cooper Union School of Art. But, after two years of hostility from white students, he left and enrolled at the Harlem Community Art Center to study painting. At the same time, he worked as a sign painter for the Works Progress Administration (WPA), the federally-funded program for artists during the Depression. Afterwards he served in the Army as a topographical draftsman during World War II and, when he returned to New York, he began screen-printing. His first exhibit of silk screen printing was at a New York gallery in 1947.

DeCarava first used a camera to record street scenes he wanted to paint, but it soon became his primary interest. With a 35-millimeter camera he shot in black and white, using the shadow and light to capture spontaneous moments in Harlem. His first photo exhibit was in 1950, at the Forty-Fourth Street Gallery in New York City, and he soon found a mentor in Edward Steichen, director of photography at the Museum of Modern Art.

In 1952, DeCarava became the first African American to receive the Guggenheim fellowship and he used the $3,200 to support himself, while he spent a year photographing Harlem full-time. DeCarava published these photos in the book Sweet Flypaper of Life, on which he collaborated with Langston Hughes. Around the same time, DeCarava began working on his second book, The Sound I Saw, in which he photographed Harlem’s jazz musicians like Louis Armstrong and Billie Holiday. His photos initially appeared on many record albums covers, but the book was finally published in 2001.

Starting in the late 1950s, DeCarava supported himself as freelance journalist. He shot for Newsweek, Look, Life, and as a contract photographer for Sports Illustrated from 1968 to 1975. His experience as a photojournalist led him to chair the American Society of Magazine Photographers’ Committee to End Discrimination Against Black Photographers from 1963 to 1966. He simultaneously fought to win full recognition of his photography in museums and galleries. From 1955 to 1957 he operated his own exhibit space, the Photographer’s Gallery, in his apartment to support this cause.

His first solo museum exhibition, “Harlem on My Mind,” appeared at the Metropolitan Museum of Art in 1969.  DeCarava joined the protesters outside who admonished the curators for failing to invite Harlem’s civic leaders and artists to the exhibition. In the late 1960s, he began teaching at the Cooper Union for the Advancement of Science and Art in New York and, in 1975, at Hunter College. Over his career, DeCarava produced five books, landmark museum catalogs, and retrospective surveys.

DeCarava married Sherry Turner in 1970 and the couple had four children: Laura, Susan, and Wendy, along with a son, Vincent, from a previous marriage. In 2006, DeCarava was awarded the National Medal of Arts, the highest award given to artists by the US government.