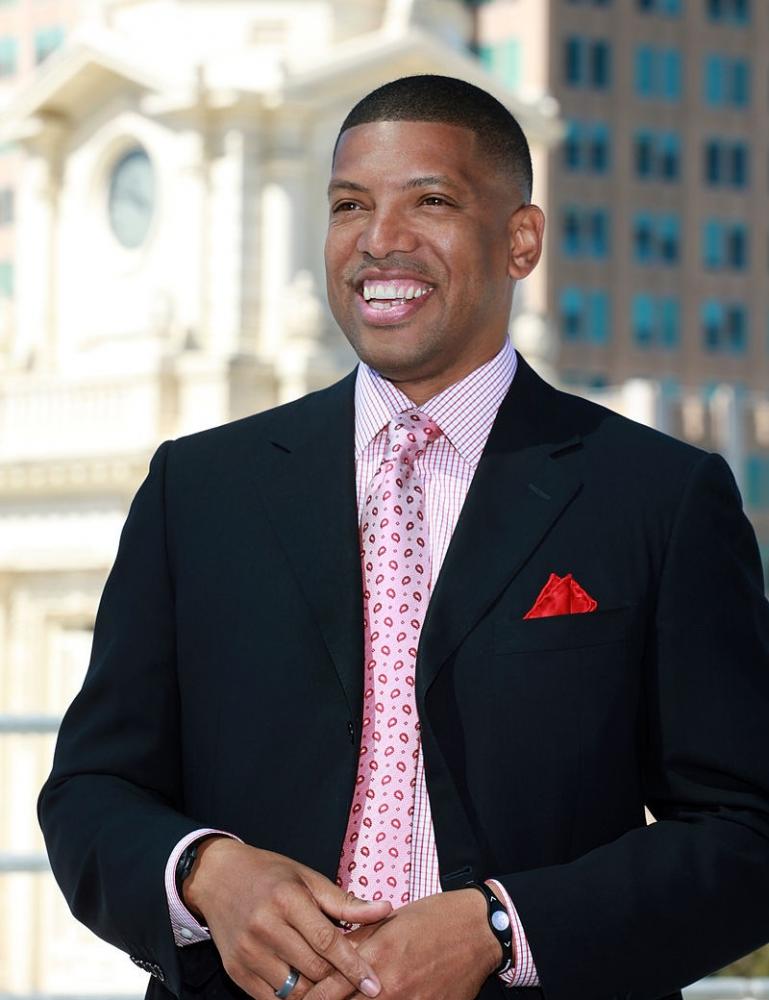 Kevin Maurice Johnson served as Mayor of Sacramento, California, from December 2, 2008 to December 13, 2016. Johnson, the son of Georgia West and Lawrence Johnson, was born in California’s capital city on March 4, 1966. He graduated from Sacramento High School, where he led the state in basketball scoring during his senior year, with a point average of 32.5 points. Johnson then played college basketball at the University of California at Berkeley.  While there he became the all-time leader in scoring for that varsity team.  After graduating from UC Berkeley in 1987, Johnson was drafted into the National Basketball Association (NBA).

As the seventh round draft pick, Johnson was chosen by the Cleveland Cavaliers, but was quickly traded to the Phoenix Suns in 1988, where he remained for the duration of his career in the NBA. Johnson played point guard, and with his high point-scoring, was considered by many teams as a threat. The Phoenix Suns’ overall record improved with his selection and so did Johnson’s performance.

During his first year with Phoenix (1988-1989), Johnson was named the NBA’s most improved player.  He also competed in all-star games in 1990, 1991, and 1994 and played on the U.S. Olympic Basketball team (Dream Team II) which won a gold medal in Toronto, Canada in the 1994 World Championship of Basketball.  Kevin Johnson officially retired from the NBA on August 8, 2000 after 13 years in the league.

While Kevin Johnson was achieving success and fame in the NBA, his old Sacramento neighborhood began to deteriorate due to the rise of the crack cocaine epidemic and the accompanying gang violence.  Johnson decided to return to Sacramento to do what he could to turn around the desperate conditions which had destroyed the lives of his childhood friends and high school teammates.   He became part of an ongoing effort to reclaim his neighborhood and similar ones throughout the city.

Johnson founded and is currently CEO of St. Hope, a non-profit community development organization he created with his former high school, Sacramento High.  Johnson and his family (he was part of the third generation of his family to attend the school) met with the Sacramento City Teachers Association and the Sacramento School Board to curb disruptive behavior and improve academic performance in the school.  St. Hope and local educators revamped the campus with $7 million in donations raised by Johnson and his friends.  They adopted a radical plan which divided the huge school into six separate schools, each with a different academic focus. He also began renovating several blocks of his old neighborhood in Oak Park, and helped create a safe community focused on art, music, and family.

Johnson’s efforts garnered widespread favorable attention and on March 5, 2008 he announced he would run for Mayor. The campaign was successful with Johnson receiving 92,288 votes over his opponent, incumbent mayor Heather Fargo’s 67,348 vote total. Johnson became the 55th mayor of the city and the first African American elected into the position. His ambitious goals for Sacramento included improved public safety by adding more police officers on the streets and bringing together rival gang leaders to turn them away from violence.  Johnson also attempted to improve education city-wide and boost the local economy by supporting businesses and encouraging economic growth.  On September 3, 2011, Johnson married Michelle Rhee, the former Chancellor of the District of Columbia School System and a nationally prominent education reformer. Johnson is a member of Sigma Pi Phi Fraternity.

Kevin Johnson ran for reelection in 2012 garnering 58.7% of the vote in a five-way city-wide primary and thus avoiding a run-off.  His second term, however, was marred by controversy including two charges of alleged sexual assault in Phoenix and Sacramento before he became mayor. Members of the Oak Park community in Sacramento also charged Mayor Johnson with code violations in some of the rental real estate he owned in the neighborhood.

Johnson declined to run for a third term as Sacramento mayor and left office when his second term expired on December 13, 2016.