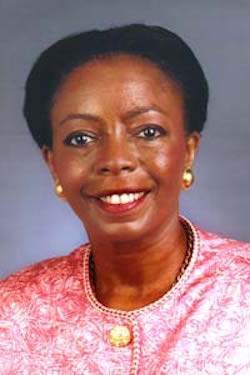 Shirley Elizabeth Barnes is a former United States Ambassador to the African country of Madagascar, 1998-2001.  Barnes was nominated by President Bill Clinton on June 29, 1998 and after confirmation by the U.S. Senate, arrived in Antananarivo, the capital of Madagascar, and presented her credentials on August 30, 1998.

Ambassador Barnes was born in St. Augustine, Florida on April 5, 1938.  Her father worked as a waiter out of Miami for the Seaboard Airlines Railroad before he moved his family to Saratoga, New York, when Shirley was just five years old.  There, her father continued to work as a waiter most of his life, while her mother worked as a teacher, a pianist, and a dressmaker.  Eventually, the family prospered and settled in the Sugar Hill neighborhood of New York City.

Barnes attended the Baruch School of Business at the City College of New York and graduated with a Bachelor’s degree in Business Administration in 1956.  While in college, she joined the National Association for the Advancement of Colored People (NAACP) and pledged Delta Sigma Theta Sorority, Inc.  She also became fluent in the French language while at City College.

Through her church, Barnes was introduced to Crossroads Africa, a recently created student exchange program that connected student service projects in rural villages of various African countries.  Through this experience, Barnes travelled to Togo, West Africa, and helped to build schools in 1958.

Upon her return, she decided to return to school to study international affairs and international relations at Boston University in Massachusetts.  While at Boston University, a Crossroads Africa colleague connected her to an opportunity in the Congo.  She worked there for the Ford Foundation from 1961 to 1965 as a program assistant.  During her time in the Congo she worked on education, environmental issues, gender issues, and civil unrest.  Returning to the United States in 1965, Barnes worked for the African American Institute, an organization of African Americans who promoted African interest in the United States.  She worked in their Women’s African Program before leaving in 1969 to earn a Master’s degree in Business Administration from Columbia University in 1970.

After working for a private advertising business for 13 years, Barnes joined the U.S. Foreign Service in 1983.  Following her training at the Foreign Service Institute, Barnes was a General Services Officer (GSO) at the U.S. Embassy in Cairo, Egypt, from 1984 to 1986.  In 1986, Barnes became the Supervisor for the General Services Office at the American Embassy in Dakar, Senegal.  Barnes’s extensive career in the Foreign Service also includes a position as Counselor for Administration in East Berlin, Germany from 1990 to 1992. While there she witnessed the reunification of East and West Germany in 1990.

Barnes was also Consul General in Strasbourg, France (1992-1995), and Director of the Office of Western European Affairs at the U.S. State Department from 1996 to 1998.  In 1998, she took her post as the U.S. Ambassador to Madagascar and served there until July 28, 2001 when she returned to the United States and retired from the U.S. Foreign Service.

Following her retirement from the Foreign Service in 2001, Barnes founded a small non-profit organization, The Barnes Findley Foundation, whose objectives are to promote economic development and educational and job training programs for African girls and women.  The foundation’s special commitment is on efforts to prevent human trafficking, as well as the kidnapping and enslavement of women and children.

In 2006, Shirley Barnes was awarded an honorary Doctor of Laws degree from Knox College in Galesburg, Illinois, in honor of her international and humanitarian commitment and of her prestigious career in the US Government.