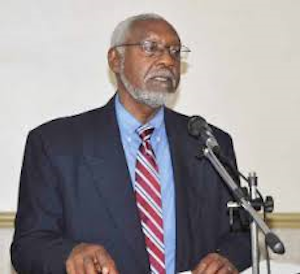 John Melvin Jones was appointed U.S. Ambassador to Guyana in 2008.  Nominated by President George W. Bush on June 30, 2008, he was confirmed by the U.S. Senate and arrived in Georgetown, the capital of Guyana, on October 8 of that year.  Due to health issues, the result of injuries sustained while on non-military duty in the Middle East, Jones resigned, returned to the U.S. on December 31, 2009, and retired after serving 28 years with the U.S. Department of State.

A career member of the U.S. Foreign Service since 1981, he has held several posts overseas. He has served as Consul General in Tegucigalpa, Honduras; Deputy Chief of Mission in Ouagadougou, Burkina Faso; Consul General in Brussels, Belgium; Head of the Refugee Office in Bangkok, Thailand, and Consular Officer at the U.S. Embassy in Santo Domingo, the Dominican Republic. He also served briefly at the U.S. Embassy in San Jose, Costa Rica.

By the mid-1990s Jones had become an expert in counter-terrorist activity.  During that period he was the State Department Representative on the Foreign Terrorist Asset Targeting Group.  With that background he became involved in the Second Iraq War, 2003 to 2011.  Jones served as Special Advisor for the office of the Coordinator for Stabilization and Reconstruction in Iraq and as Provincial Reconstruction Team Leader in Diyala Province, Iraq.  While in that mixed Sunni-Shi’a Province just north of Baghdad, a bounty was placed on his head by the local al-Qaeda organization. He remained undeterred and continued to serve as team leader despite the apparent danger.  While in a combat zone, a suicide bomber exploded a truck of toxic chlorine gas. Jones survived but pulmonary surgery was required which had long lasting effects leading to his untimely departure from his post as Ambassador to Guyana.

While ambassador in Guyana beginning in 2008, Jones promoted initiatives aimed at improving education and strengthening mass communication and journalism in that country.  He also encouraged the expatriate U.S. community there to increase its investments in the local economy.

After returning to the United States in 2009 Jones again joined the faculty at George Mason University where he currently teaches courses for the graduate programs in the schools of management and public policy.

Ambassador Jones has received the Time magazine “Current Events Award” and several Meritorious and Superior Performance awards from the U.S. State Department.  He is fluent in Spanish and French and has limited capability in Portuguese, Vietnamese, and Arabic.

John Jones and his wife, Aaronia, have a daughter, Christie Jones-Aden.