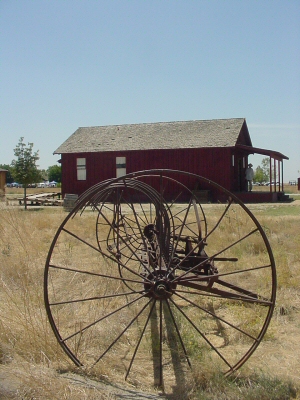 In 1908 four black men formed the California Colony and Home Promoting Association. The Association purchased 20 acres along the Santa Fe rail line from the Pacific Farming Company, at a railway stop called Solita. They divided this land into individual parcels to form the first town in California to be founded, financed, and governed by blacks. Soon after the town was founded the name was changed to Allensworth in honor of the association’s president Allen Allensworth, retired chaplain of the all-black 24th Infantry Regiment. With the success of its agricultural development and business enterprises, the town quickly grew.

By the year 1914 the town would not only have a schoolhouse it would become California’s first African American school district. It became a judicial district, had a Baptist church, a hotel, and a library that would be made part of the Tulare County free library system. The year 1914 also brought a number of setbacks to the town. First, much of the town’s economic base was lost when the Santa Fe Railroad moved its rail stop from Allensworth to Alpaugh. In September, during a trip to Monrovia, California, Colonel Allensworth was crossing the street when he was struck and killed by a motorcycle. The town refuses to die. The downtown area is now preserved as Colonel Allensworth State Historic Park where thousands of visitors come from all over California to partake in the special events held at the park during the year. The area outside of the state park is also still inhabited.