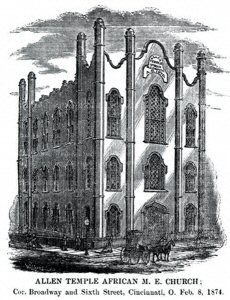 Early 19th Century African American Methodists in Cincinnati, Ohio initially worshipped at the local Methodist Episcopal churches, but were treated in a discriminatory manner. In response to this treatment Rev. James King and Rev. Phillip Brodie, after contacting leaders of the new AME Church denomination that was growing on the East Coast, founded the Cincinnati African Methodist Episcopal (AME) congregation in 1824.

The congregation occupied several different places of worship, including the cellar of Rev. Brodie’s home, before a more permanent structure could be built. These early small churches went by various names including “Little Red Church on the Green,” “Old Lime House,” and “Bethel Creek.”

In 1850 a permanent building was constructed while the church was still known as Bethel Creek AME. By 1870, after their church experienced both growth and vandalism, the congregation took over the Bene Israel Synagogue. This former synagogue had special meaning for the congregation as it had symbolic connections to the enslaved Israelites who gained their freedom. The church then took the name, Allen Temple, after Richard Allen, the founder of the AME Church. The Allen Temple African Methodist Episcopal Church is the “mother” of the Third District of the AME Church, and is the oldest black church in Cincinnati and the state of Ohio.

The first few years at the new building were difficult for the church financially because it owed money to the Bene Israel congregation. In addition, a fire broke out in 1874, causing damages that cost the church additional funds. In response, several charity groups formed to raise money and eventually helped Allen Temple AME retire its debts.  Through this experience the church was able to form a close relationship with Cincinnati area charities, which led to subsequent social work and community involvement.

At the beginning of the 20th century the church had more than 800 members. Over the decades it continued to grow, and in 1979 Allen Chapel acquired the Roselawn Baptist Church building. In 1998 the church moved again, this time purchasing a building on the Swifton Commons Mall at the corner of Reading and Seymour Streets. The new edifice officially opened for worship in 2000. On October 19, 2013 the church expanded with a 10,000 square foot annex.

Over its history Allen Chapel AME Church has been involved in the surrounding black Cincinnati community. Just after the Civil War the church organized a Freedmen‘s Aid Society, which distributed rations to the needy, cared for the sick, and helped find shelter for former slaves arriving from Kentucky and other Southern states. Today the church supports a Family Life Center and has recently hosted “Opera Goes to Church” events, where singers from the Cincinnati Opera put on an annual summer concert in the church.