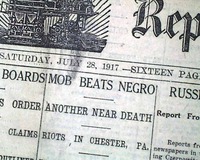 The 1917 Race Riot in Chester, Pennsylvania began July 24, 1917 and continued until July 30, 1917.  It is considered unique from many of the other race riots of the World War I and interwar period because there were no accusations of police brutality, and city officials and police made strenuous efforts to prevent the lynching of blacks rather than participating in or ignoring the violence.  Chester’s mayor, Wesley S. McDowell, was ridiculed in the press for treating black and white rioters equally and received death from whites who wanted to “run the Negroes out of town.”

Racial tensions in Chester had been building for months as Southern blacks migrated North looking for work.  Chester was not a segregated city as blacks and whites lived in the same neighborhoods throughout the city, but blacks generally lived in poorer conditions.  White workers expressed anxiety about the influx of black laborers. Throughout July 1917 there were incidents of interracial violence.

On the evening of July 24, a confrontation occurred between four black people–two men and two women–and one white man, William McKinney.  Accounts varied as to what happened, but ultimately McKinney was stabbed to death by Arthur Thomas, one of the black men.  Although Thomas and his associates were arrested on July 25, that evening gangs of white men began roaming the city to get revenge on any black person they saw. The violence continued throughout the week as black people began defending themselves and actively attacking whites they encountered.  Clashes involving hundreds of black and white rioters were fought with guns, knives and clubs. By the time the violence ended four days later, seven people were dead and and twenty-eight had suffered gunshot wounds.

Police acted quickly to end the violence and arrested hundreds of white and black rioters.  In total, there were over 360 arrests, with many being brought to trial. Although the riot was officially declared over on July 31, violence continued sporadically throughout August.  Investigations into the riot concluded that the labor situation played no role in the violence and that the conflict occurred because of a conspiracy by white gang members and associates of McKinney: Selimo Dinacio, James Riddles and Joseph McCann.  Dinacio and Riddles were arrested for inciting a riot but McCann had been killed during the riot.  Thomas was found guilty of voluntary manslaughter in McKinney’s death and sentenced to 15 months in prison.