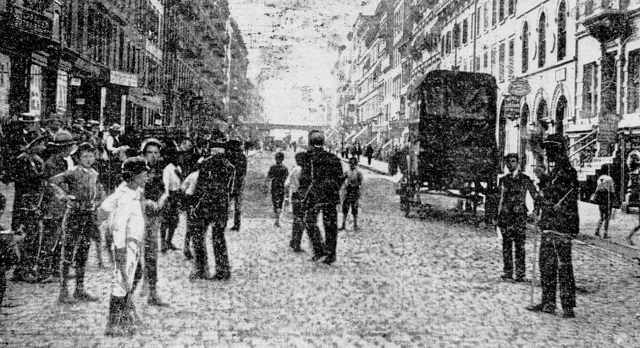 The 1900 New York City, New York Race Riot began following an incident between Arthur J. Harris, a black man, and a white undercover police officer, Robert J. Thorpe, outside the apartment of Harris and his girlfriend May Enoch in the Tenderloin section of New York City.  At 2:00 a.m. on August 13, Harris witnessed Thorpe grabbing Enoch, whom Thorpe believed to be a prostitute soliciting customers.  Harris, not knowing that Thorpe was a police officer, attacked Thorpe and cut him with a knife.  Both Harris and Enoch fled the scene.  Harris left for his mother’s home in Washington D.C.and Enoch ran into her apartment where she was later arrested.   Thorpe, who was also the son in-law of Acting Captain John Cooney of the local Twentieth Police Precinct, was taken to Roosevelt Hospital where he died the next day.

The Tenderloin was a traditionally Irish section of New York that was becoming increasingly integrated by Southern black migrants looking for work in New York. Thorpe’s death pushed racial tensions between the two groups in the neighborhood to the edge.

On August 15, the day before Thorpe’s funeral, a fight broke out near Thorpe’s family’s home between a white man, Thomas J. Healy, and a black man, Spencer Walters.  Walters was beaten to near death by a white mob that gathered.  This assault touched off the riot.

The word spread that blacks would be assaulted and they were soon attacked by white street gangs throughout the Tenderloin and surrounding areas.  Black people were randomly assaulted as they returned home from work prompting many to stay at their place of employment rather than return to their residences.

New York City Mayor Robert Van Wyck and Police Chief William Devery sent 700 police into the Tenderloin to quell the rebellion.  Black men and women, however, were disproportionately arrested during the riot and many were severely beaten while in police custody.

On August 16, the riot subsided.  The next day, black people began arming themselves and a black defense committee, the Citizens Protective League (CPL), was formed on September 3.  Approximately 35 people were arrested and 60 people injured during the riot, mostly black people.  There were no reported deaths.

For more than a month after the riot, daily incidents of racial violence continued and police reported that blacks threw bricks, bottles, and garbage at them from the rooftops.  No legal action was ever taken against the police involved in the riot despite pleas from the CPL and wide spread accusations of police brutality against black people in the New York City press.  Harris was arrested and convicted in the death of Thorpe and was sentenced to life in prison. He died there on December 20, 1908.