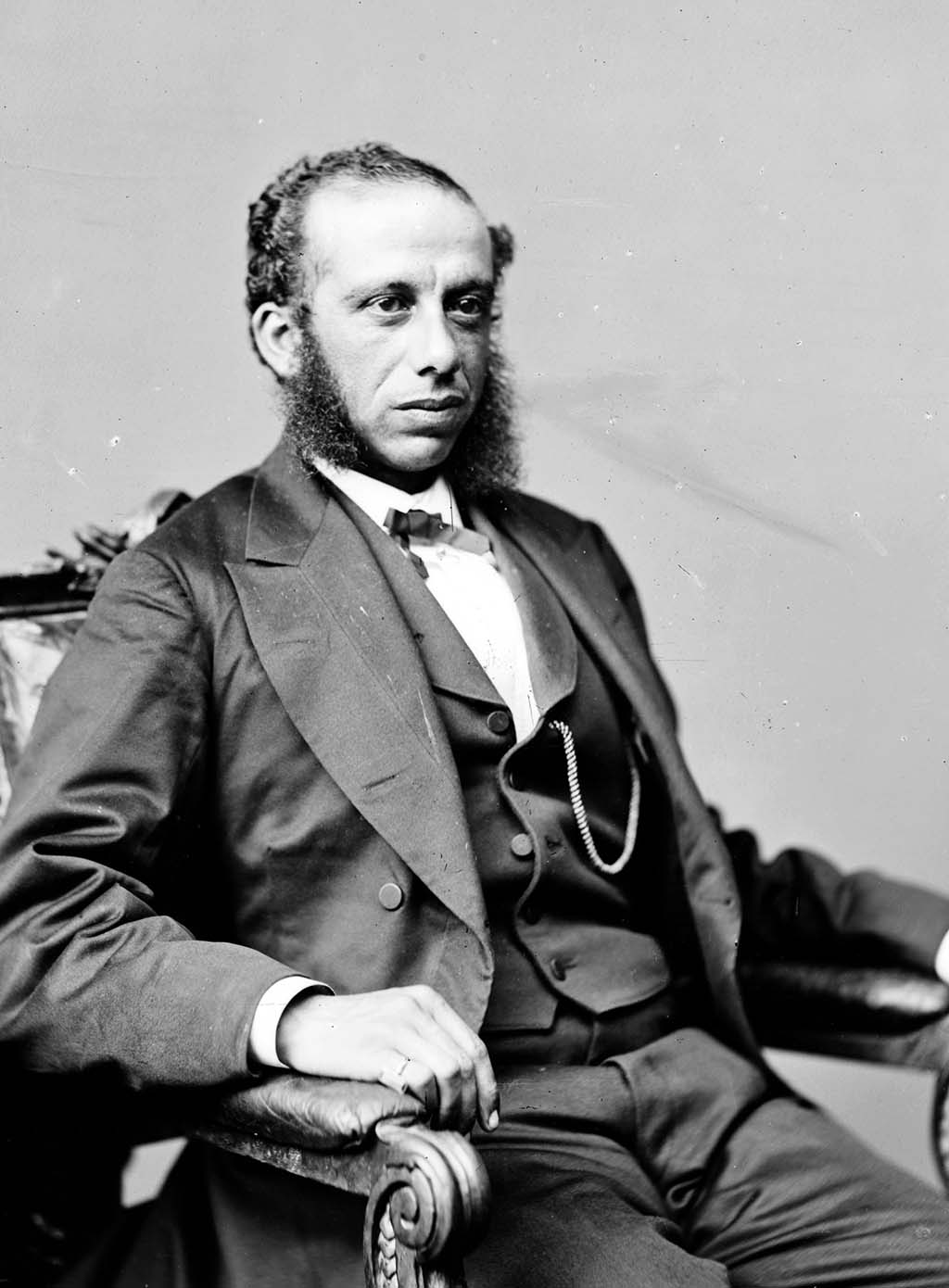 Robert Carlos DeLarge served as a Republican member of the U.S. Congress less than a full term. He was elected in 1870 and began his term on March 4, 1871. However he left Congress on January 24, 1873 within two months of the completion of his term when the seat was declared vacant as the result of an election challenge initiated by Christopher C. Bowen, his Democratic opponent. After he left Congress DeLarge served as a local magistrate until his death in Charleston on February 14, 1874. One of DeLarge’s speeches appears below. Here he calls for the enforcement of the Fourteenth Amendment to the Constitution which guarantees citizenship to all African Americans while defending his fellow black South Carolinians against the charge of supporting a fiscally irresponsible government.

Mr. Speaker: I had supposed that in the consideration of this matter of legislation for the South party lines would not have been so distinctly drawn, but that we would have at least first endeavored to ascertain whether or no there was any necessity for the legislation, and then decide what kind of legislation would be best. I say I did not expect that party lines would be drawn so distinctly while considering a matter of such grave import.

I believe that if there was a single gentleman upon the floor of this House who, before the commencement of this debate, doubted that lawlessness, confusion, and anarchy existed in some portions of the South, he is at least cured of that doubt by this time. Gentlemen upon both sides of the House have in their speeches acknowledged, and, by the evidence produced, proven to my satisfaction, and, I believe, to the satisfaction of a majority of the members of this House, that such a state of affairs does exist in some portions of the southern states.

I am free to say that none can bring the charge to my door of ever having acted in a manner that would be termed illiberal. I am also free to say that I, like other gentlemen upon the floor of this House, have the honor of representing a district in which no case of outlawry has ever occurred. Since the time of reconstruction no outrage has been committed in my district; and I say frankly to you today that until within the last few months no one upon the face of god’s earth could have convinced me that any secret organization existed in my State for the purpose of committing murder, arson, or other outrages upon the lives, liberty, and property of the people; and, sir, I sincerely deplore and lament the abundance of that evidence which so plainly proves the existence of such an organization today. Would to God, sir, that the fair fame of the State of my birth, and which I have the honor in part to represent, had not been marred by the wicked deeds of these outlaws, who shrink from no cruelty, who spare no sex nor station to carry out their devilish purposes.

But, sir, I cannot shut my eyes to facts; I cannot refuse to yield my faith to tales of horror so fully proven; and I am thoroughly convinced that it is necessary to do something to cure these awful wrongs. I am free to admit that neither the Republicans of my State nor the Democrats of that State can shake their garments and say that they have had no hand in bringing about this condition of affairs. Both parties are responsible for it. As a member of the Republican party I may state, while demanding legislation on behalf of all the citizens there, that both parties to a considerable extent are responsible for this condition of things. Sir, it is necessary that we should legislate upon this subject. The Governor of my State has called upon the Executive of this country for assistance and protection. He has stated distinctly in that call that he is unable to preserve the public peace in some districts of that State. That is something which we must all admit. That is not denied by the Democrats of South Carolina. Some of them doubtless rejoice in this, because they can throw the blame, as they think, upon the administration of the State, which is in the hands of their political foes. It is not now the question, what is the cause which has brought about this condition of affairs. It is useless, except for the purpose of gaining partisan credit or fixing partisan odium, now to charge the blame here or there. But, sir, the naked facts stare us in the face, that this condition of affairs does exist, and that it is necessary for the strong arm of the law to interpose and protect the people in their lives, liberty, and property.

Just here allow me to make a suggestion. If the gentlemen on this side of the House propose to legislate for the benefit of the people of the South, I tell them, and say it fully conscious of the responsibility that rests upon me in saying it, that while legislation is necessary, yet unless they are ready to concede along with this legislation for the protection of the loyal people of the South some accompanying measure to go hand in hand with this and remove as far as in our power rests some of the evils that have brought about the existing condition of things, neither this legislation nor any other that you may pass from now until the hour of doom will be of any benefit. I speak knowing what I say.

Mr. Speaker, when the Governor of my State the other day called in council the leading men of that State, to consider the condition of affairs there and to advise that measure would be best for the protection of the people, whom did he call together? The major portion of the men whom he convened were men resting under political disabilities imposed by the fourteenth amendment. In good faith I ask gentlemen on this side of the House, and gentlemen on the other side, whether it is reasonable to expect that these men should be interested, in any shape or form, in using their influence and best endeavors for the preservation of the public peace, when they have nothing to look for politically in the future? You say they should have the moral and material interest of their State at heart, though even always to be denied a participation in its honors. You may insist that the true patriot seeks no personal ends in the acts of patriotism. All this is true; but, Mr. Speaker, men are but men everywhere, and you ought not to expect of those whom you daily call by opprobrious epithets, whom you daily remind of their political sins, whom you persistently exclude from places of the smallest trust in the Government you have created, to be very earnest to cooperate with you in the work of establishing and fortifying governments set up in hostility to the whole tone of their prejudices, their convictions, and their sympathies. What ought to be is one thing, what in the weakness and fallibility of human nature will be is quite another thing. The statesman regards the actual and acts upon it; the desirable, the possible, and even the probable furnishes but poor basis for political action.

If I had time I would enumerate some of the causes which have brought about the existing state of affairs. I am not here to apologize for murderers; I am not here to defend any one who has committed any act of impropriety or wrong. But, sir, it is a fact, I do not give it as any or even the slightest excuse for the Democrats of my State, who, by their influence secretly or by joining in armed organization, have brought about this condition of affairs—it is a fact, unfortunately for us, that our party has done some things which give color to the charge that it is responsible to some degree for the evils which afflict us.

When I heard the gentleman from New York [Mr. Cox] on Tuesday last hurl his shafts against the members of my race, charging that their ignorance they had brought about these excesses, I though he should have remembered that for the ignorance of that portion of the people he and his party associates are responsible, not those people themselves. While there may have been extravagance and corruption resulting from the placing of improper men in official positions—these evils have been brought about by men identified with the race to which the gentleman from New York belongs, and by our race.

Many men like himself, in order to get a better position in society or officially, came down among us, and, not knowing them, we placed them in position. If we, through ignorance, have placed them in position, have placed them in power, and they have deceived us, it is no fault of ours. In this connection I desire to have read a part of the remarks of the gentleman from New York on Tuesday last. The Clerk read as follows: “South Carolina has been infested by the worst local government ever vouchsafed to a people. Ignorance, bribery, and corruption are common in her Legislature. Bond by the million are issued, the public debt increased, and nothing to show for it. The debt in 1860 was but $3,691,574. It was last year $11,429,711; and this year no one knows whether it is twenty or thirty millions, nor how much is counterfeit or genuine! Her rulers contrived new burdens in order to blunder more. On full valuation of real and personal property of $183,913,367 the people pay this year sixteen mills on the dollar as a State tax and four mills county tax.

“Add to these grievances the intolerable exactions of the Federal Government, not only in taxes, but in laws, and it should give us pause before we place that people at the mercy of an inferior race, a vindictive party, a court-martial, and a hostile President. The people in their agony in that State actually clamored for United States troops to save them from the rapacity and murder of the negro bands and their white allies. Can we not understand why men, born free, should rise, or, if not rise with safety, that they are compelled to hide in Ku Klux or other secret clans, and strike against this ruin and desolation, peculation and violence, and that, too, when it is done by those who are not of their race and but lately in their midst?

MR. DE LARGE. I desire to correct the statement made by the gentleman from New York, that the State tax of South Carolina for 1870 is only nine mills on the dollar for 1871, seven mills, not as he states, sixteen mills. I have already alluded to the ignorance referred to in the gentleman’s remarks. Before closing I desire to say that I hope the House will adopt the substitute of the gentleman from Ohio. I am prepared to vote for that substitute, while I am free to admit that I did not intend to vote for the bill as originally reported.