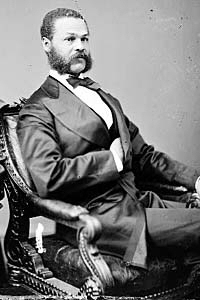 Jefferson Franklin Long (1836-1901) was the first African American from Georgia to serve in the United States House of Representatives. Born into slavery near Knoxville in Crawford County, Georgia, he was self-educated and became a merchant tailor in Macon, Georgia. Long was elected in December 1870 to complete the unexpired term of Samuel F. Grove who was declared ineligible to serve. Long served three months until March 1871. During his brief tenure in Congress Long gave one brief speech urging that body to keep in place the test-oath which disqualified thousands of ex-Confederates from voting. However Long used this opportunity denounce the Ku Klux Klan and other terrorist groups who attempted to suppress the African American vote. His speech appears below.

Mr. Speaker the object of the bill before the House is to modify the test-oath. As a citizen of the South, living in Georgia, born and raised in that State, having been there during the war and up to the present time, I know the condition of affairs in that State. Now, sir, we propose here today to modify the test-oath, and to give to those men in the rebel States who are disloyal today to the government this favor. We propose, sir, to remove political disabilities from the very men who were the leaders of the Ku Klux and who have committed midnight outrages in that State.

What do those men say? Before their disabilities are removed they say, “We will remain quiet until all of our disabilities are removed, and then we shall again take the lead.” Why, Mr. Speaker, in my State since emancipation there have been over five hundred loyal men shot down by the disloyal men there, and not one of those who took part in committing those outrages has ever been brought to justice. Do we, then, really propose here today, when the country is not ready for it, when those disloyal people still hate this Government, when loyal men dare not carry the “stars and stripes” through our streets, for if they do they will be turned out of employment, to relieve from political disability the very men who have committed these Ku Klux outrages? I think that I am doing my duty to my constituents and my duty to my country when I vote against any such proposition.

Yes, sir; I do mean that murders and outrages are being committed there. I received no longer ago than this morning a letter from a man in my State, a loyal man who was appointed postmaster by the President, stating that he was beaten in the streets a few days ago. I have also received information from the lower part of Georgia that disloyal men went in the midnight disguised and took a loyal man out and shot him; and not one of them has been brought to justice. Loyal men are constantly being cruelly beaten. When we take the men who commit these outrages before judges and juries we find that they are in the hands of the very Ku Klux themselves who protect them.

Mr. Speaker, I propose, as a man raised as a slave, my mother a slave before me, and my ancestry slaves as far back as I can trace them, yet holding no animosity to the law-abiding people of my State, and those who are willing to stand by the Government, still I propose for one, knowing the condition of things there in Georgia, not to vote for any modification of the test-oath in favor of disloyal men.

Gentlemen on the other side of the House have complimented men on the side. I hope the blood of the Ku Klux has not got upon this side; I hope not. If this House removes the disabilities of disloyal men by modifying the test-oath, I venture to prophesy you will again have trouble from the very same men who gave you trouble before.