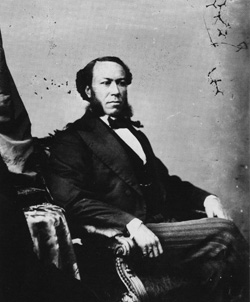 Joseph H. Rainey, “Speech Made in Reply to An Attack Upon the Colored State Legislators of South Carolina by Representative Cox of New York,” 1871

Joseph Hayne Rainey, born in Georgetown, South Carolina to enslaved parents in 1832, became on December 12, 1870, the first African American to serve in the United States House of Representatives and only the second person to serve Congress, after U.S. Senator Hiram Revels of Mississippi. He was elected to Congress four times as a Republican, serving until March 3, 1879 which made him the longest serving black Congressman during the Reconstruction era. In a speech given on the floor of Congress in 1871, Rainey challenges a New York Democratic representative who made disparaging remarks about the black members of the South Carolina state legislature. That speech appears below.

The remarks made by the gentleman from New York in relation to the colored people of South Carolina escaped my hearing, as I was in the rear of the Hall when they were made, and I did not know that any utterance of that kind had emanated from him. I have always entertained a high regard for the gentleman from New York, because I believed him to be a useful member of the House. He is a gentleman of talent and of fine education, and I have thought heretofore that he would certainly be charitable toward a race of people who have never enjoyed the same advantages that he has. If the colored people of South Carolina had been accorded the same advantages—if they had had the same wealth and surroundings which the gentleman from New York has had, they would have shown to this nation that their color was no obstacle to their holding positions of trust, political or otherwise. Not having had these advantages, we cannot at the present time compete with the favored race of this country; but perhaps if our lives are spared, and if the gentleman from New York and other gentlemen on that side of the House will only accord to us right and justice, we shall show to them that we can be useful, intelligent citizens of this country. But if they will continue to proscribe us, if they will continue to cultivate prejudice against us; if they will continue to decry the Negro and crush him under foot, then you cannot expect the Negro to rise while the Democrats are trampling upon him and his rights. We ask you, sir, to do by the Negro as you ought to do by him in justice.

If the Democrats are such staunch friends of the Negro, why is it that when propositions are offered here and elsewhere looking to the elevation of the colored race, and the extension of right and justice to them, do the Democrats array themselves in unbroken phalanx, and vote against every such measure? You, gentlemen of that side of the House, have voted against all the recent amendments of the Constitution, and the laws enforcing the same. Why did you do it? I answer, because those measures had a tendency to give to the poor Negro his just rights, and because they proposed to knock off his shackles and give him freedom of speech, freedom of action, and the opportunity of education, that he might elevate himself to the dignity of manhood.

Now you come to us and say that you are our best friends. We would that we could look upon you as such. We would that your votes as recorded in the Globe from day to day could only demonstrate it. But your votes, your actions, and the constant cultivation of your cherished prejudices prove to the Negroes of the entire country that the Democrats are in opposition to them, and if they [the Democrats] could have sway our race would have no foothold here.

Now, sir, I have not time to vindicate fully the course of action of the colored people of South Carolina. We are certainly in the majority there; I admit that we are as two to one. Sir, I ask this House, I ask the country, I ask white men, I ask Democrats, I ask Republicans whether the Negroes have presumed to take improper advantage of the majority they hold in that State by disregarding the interest of the minority? They have not. Our convention which met in 1868, and in which the Negroes were in a large majority, did not pass any proscriptive or disfranchising acts, but adopted a liberal constitution, securing alike equal rights to all citizens, white and black, male and female, as far as possible. Mark you, we did not discriminate, although we had a majority. Our constitution towers up in its majesty with provisions for equal protection of all classes and citizens. Notwithstanding our majority there, we have never attempted to deprive any man in that State of the rights and immunities to which he is entitled under the Constitution of this Government. You cannot point me to a single act passed by our Legislature, at any time, which had a tendency to reflect upon or oppress any white citizen of South Carolina. You cannot show me one enactment by which the majority in our State have undertaken to crush the white men because the latter are in a minority.

I say to you, gentlemen of the Democratic party, that I want you to deal justly with the people composing my race. I am here representing a Republican constituency made up of white and colored men. I say to you deal with us justly; be charitable toward us. An opportunity will soon present itself when we can test whether you on that side of the House are the best friends of the oppressed and ill-treated Negro race. When the civil rights bill comes before you, when that bill comes up upon its merits asking you to give civil rights of the Negro, I will then see who are our best friends on that side of the House.

I will say to the gentleman from New York that I am sorry I am constrained to make these remarks. I wish to say to him that I do not mind what he may have said against the Negroes of South Carolina. Neither his friendship nor his enmity will change the sentiment of the loyal men of that State. We are determined to stand by this Government. We are determined to use judiciously and wisely the prerogative conferred upon us by the Republican party. The democratic party may woo us, they may court us and try to get us to worship at their shrine, but I will tell the gentleman that we are republicans by instinct, and we will be Republicans so long as God will allow our proper senses to hold sway over us.

BlackPast, B. (2007, January 28). (1871) Congressman Joseph H. Rainey, “Speech Made in Reply to An Attack Upon the Colored State Legislators of South Carolina…”. BlackPast.org. https://www.blackpast.org/african-american-history/1871-joseph-h-rainey-speech-made-reply-attack-upon-colored-state-legislators-south-carolina/