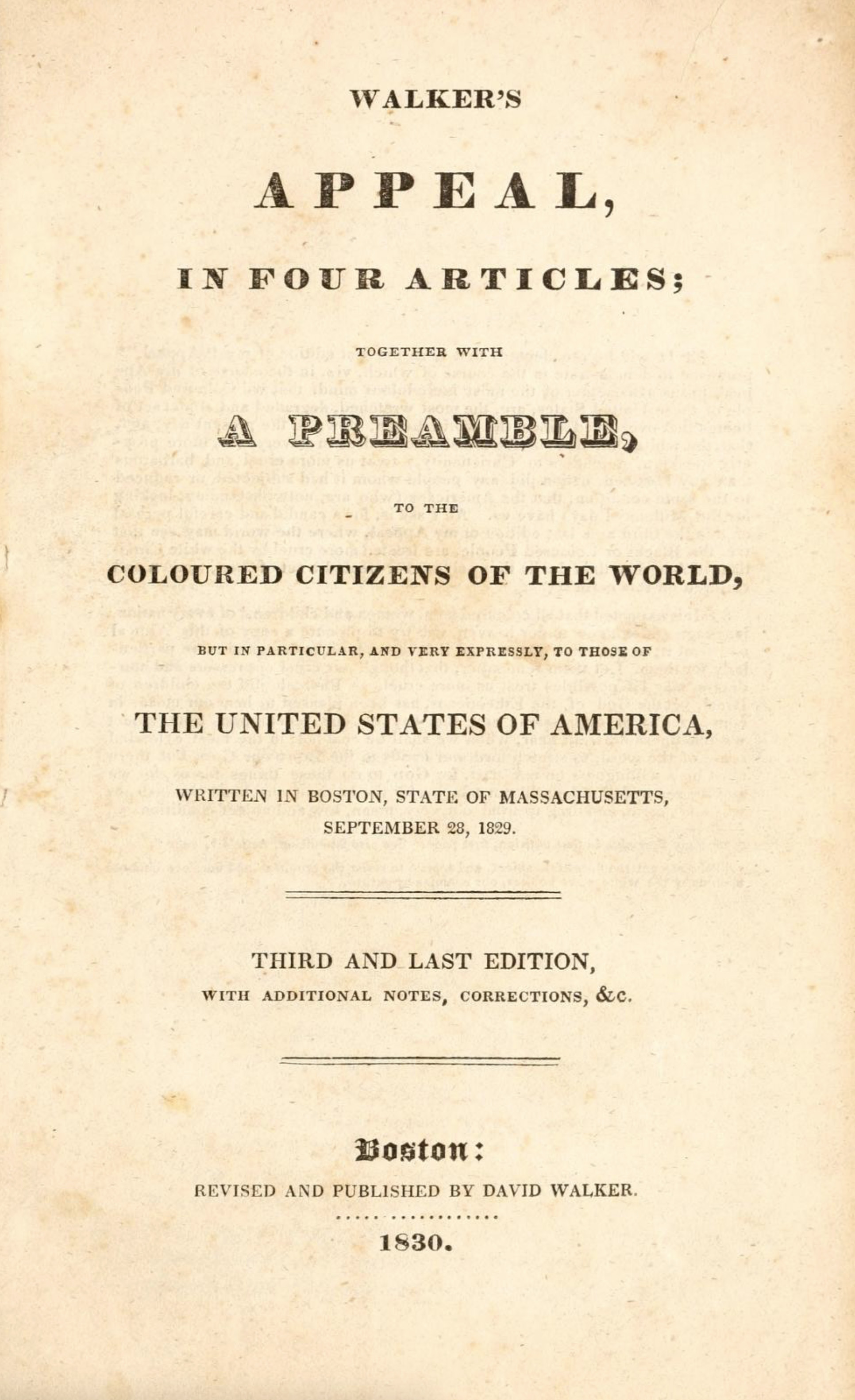 David Walker (1796-1830) is best known for his revolutionary pamphlet, Walker’s Appeal, in Four Ariticles: together with a preamble, to the coloured Citizens of the World, but in Particular and Very expressly to those of the United States of America. This twenty-six-page pamphlet warned of a bloody insurrection if American slaveholders did not liberate their enslaved. This was the first call for armed insurrection. Walker was born free in Wilmington, North Carolina, and moved to Boston, where he was the proprietor of a new and used clothing store form 1825 to his death in 1830. Walker’s speeches are less well known. In December, 1828 he delivered an address before the Massachusetts General Colored Association, an organization founded two years earlier in Boston to oppose slavery and discrimination against free blacks. The speech, which called for organization and united action among African Americans, appears below.

Mr. President,—I cannot but congratulate you, together with my brethren on this highly interesting occasion, the first semi-annual meeting of this Society. When I reflect upon the many impediments though which we have had to conduct its affairs, and see, with emotion of delight, the present degree of eminency to which it has arisen, I cannot, sir, but be of the opinion, that an invisible arm must have been stretched out in our behalf. From the very second conference, which was by us convened, to agitate the proposition respecting the society, to the final consolidation, we were by some, opposed, with an avidity and zeal, which, had it been on the opposite side, would have done great honor to themselves. And, sir, but for the undeviating, and truly patriotic exertions of those who were favorable to the formation of this institution, it might have been this day, in yet unorganized condition. Did I say in an unorganized condition? Yea, had our opponents their way, the very notion of such an institution might have been obliterated in our minds. How strange it is, to see men of sound sense, and of tolerably good judgment, act so diametrically in opposition to their interest; but I forbear making any further comments on this subject, and return to that for which we are convened.

First then, Mr. president, it is necessary to remark here, at once, that the primary object of this institution, is, to unite the colored population, so far, through the United States of America, as may be practicable and expedient; forming societies, opening, extending, and keeping up correspondences, and not withholding anything which may have the least tendency to ameliorate our miserable condition—with the restrictions, however, of not infringing on the articles of its constitution, or that of the United States of America. Now, that we are disunited, is a fact, that no one of common sense will deny; and, that the cause of which, is a powerful auxiliary in keeping us from rising to the scale of reasonable and thinking beings, none but those who delight in our degradation will attempt to contradict. Did I say those who delight in our degradation? Yea, sir, glory in keeping us ignorant and miserable, that we might be the better and the longer slaves. I was credibly informed by a gentleman of unquestionable veracity, that a slaveholder upon finding one of his young slaves with a small spelling book in his hand (not opened) fell upon and beat him almost to death, exclaiming, at the same time, to the child, you will acquire better learning than I or any of my family.

I appeal to every candid and unprejudiced mind, do not all such men glory in our miseries and degradations; and are there not millions whose chief glory centres in this horrid wickedness? Now, Mr. President, those are the very humane, philanthropic, and charitable men who proclaim to the world, that the blacks are such a poor, ignorant and degraded species of beings, that, were they set at liberty, they would die for the want of something to subsist upon, and in consequence of which, they are compelled to keep them in bondage, to do them good.

O Heaven! What will not avarice and the love of despotic sway cause men to do with their fellow creatures, when actually in their power? But, to return whence I digressed; it has been asked, in what way will the General colored Association (or the Institution) unite the colored populations, so far, in the United States, as may be practicable and expedient? To which enquiry,! I answer, by asking the following: do not two hundred and eight years very intolerable sufferings teach us the actual necessity of a general union among us? Do we not know indeed, the horrid dilemma into which we are, and from which, we must exert ourselves, to be extricated? Shall we keep slumbering on, with our arms completely folded up, exclaiming every now and then, against our miseries, yet never do the least thing to ameliorate our condition or that of posterity? Shall we not, by such inactivity, leave, or rather entail a hereditary degradation on our children, but a little, if at all, inferior to that which our fathers, under all their comparative disadvantages and privations, left on us? In fine, shall we, while almost every other people under Heaven, are making such mighty efforts to better their condition, go around from house to house, enquiring what good associations and societies are going to do us? Ought we not to form ourselves into a general body, to protect, aid, and assist each other to the utmost of our power, with the before mentioned restrictions?

Yes, Mr. President, it is indispensably our duty to try every scheme that we think will have a tendency to facilitate our salvation, and leave the final result to that God, who holds the destinies of people in the hollow of his hand, and who ever has, and will, repay every nation according to its works.

Will any be so hardy as to say, or even to imagine, that we are incapable of effecting any object which may have a tendency to hasten our emancipation, in consequence of the prevalence of ignorance and poverty among us? That the major part of us are ignorant and poor, I am at this time unprepared to deny. But shall this defer us from all lawful attempts to bring about the desired object? Nay, sir, it should rouse us to greater exertions; there ought to be a spirit of emulation and inquiry among us, a hungering and thirsting after religion; there are requisitions, which, if we ever be so happy as to acquire, will fit us for all the departments of life; and, in my humble opinion, ultimately result in rescuing us from an oppression, unparalleled, I had almost said, in the annals of the world.

But some may even think that our white brethren and friends are making such mighty efforts, for the amelioration of our condition, that we may stand as neutral spectators of the work. That we have many good friends yea, very good, among that body, perhaps none but a few of these who have ever read at all will deny; and that many of them have gone, and will go, all lengths for our good, is evident, from the very works of the great, the good, and the godlike Granville Sharpe, Wilberforce, Lundy, and the truly patriotic and lamented Mr. Ashmun, late Colonial Agent of Liberia, who, with a zeal which was only equalled by the goodness of his heart, has lost his life in our cause, and a host of others too numerous to mention: a number of private gentlemen too, who, though they say but little, are nevertheless, busily engaged for good. Now, all of those great, and indeed, good friends whom God has given us, I do humbly, and very gratefully acknowledge. But, that we should co-operate with them, as far as we are able by uniting and cultivating a spirit of friendship and of love among us, is obvious, from the very exhibition of our miseries, under which we groan.

Two millions and a half of colored people in these United States, more than five hundred thousand of whom are about two-thirds of the way free. Now, I ask, if no more than these last were united (which they must be, or always live as enemies) and resolved to aid and assist each other to the utmost of their power, what mighty deeds would be done by them of the good of our cause?

But, Mr. President, instead of a general compliance with these requisitions, which have a natural tendency to raise us in the estimation of the world, we see, to our sorrow, in the very midst of us, a gang of villains, who, for the paltry sum of fifty or a hundred dollars, will kidnap and sell into perpetual slavery, their fellow creatures! And, too, if one of their fellow sufferers, whose miseries are a little more enhanced by the scourges of a tyrant, should abscond from his pretended owner, to take a little recreation, and unfortunately fall in their way, he is gone! for they will sell him for a glass of whiskey! Brethren and fellow sufferers, I ask you, in the name of God, and of Jesus Christ, shall we suffer such notorious villains to rest peaceably among us? Will they not take our wives and little ones, more particularly our little ones, when a convenient opportunity will admit, and sell them for money, to slave holders, who will doom them to chains, handcuffs, and even unto death? May God open our eyes on those children of the devil and enemies of all good!

But, sir, this wickedness is scarcely more infernal than that which was attempted a few months since, against the government of our brethren, the Haytiens, by a consummate rogue, who out to have, long since, been haltered, but who, I was recently informed, is nevertheless, received into company among some of our most respectable men, with a kind of brotherly affection which ought to be shown only to a gentleman of honor.

Now, Mr. President, all such mean, and more than disgraceful actions as these, are powerful auxiliaries, which work for our destruction, and which are abhorred in the sight of God and of good men. But, sir, I cannot but bless God for the glorious anticipation of a not very distant period, when these things which now help to degrade us will no more be practiced among the sons of Africa,—for, though this, and perhaps another, generation may not experience the promised blessings of Heaven, yet, the dejected, degraded, and now enslaved children of Africa will have, in spite of all their enemies, to take their stand among the nations of the earth. And, sir, I verily believe that God has something in reserve for us, which, when he shall have parceled it out upon us will repay us for all our suffering and miseries.

BlackPast, B. (2007, January 24). (1828) David Walker, “The Necessity of A General Union Among Us”. BlackPast.org. https://www.blackpast.org/african-american-history/1828-david-walker-necessity-general-union-among-us/