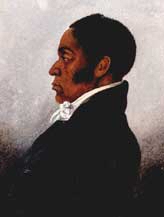 On August 10, 1817, James Forten and Russel Perrott served as chairman and secretary of a large indignation meeting of Philadelphia’s free African American community. The gathering protested the efforts of the year-old American Colonization Society to recruit blacks to leave the United States for Africa. Although many African Americans initially supported ACS efforts, these Philadelphians apparently recognized that the migration of the small free black population, which was most vocal in its opposition to slavery, would strengthen rather than weaken the institution. Forten and Perrott expressed their views in this joint address to Philadelphia’s white community.

The free people of colour, assembled together, under circumstances of deep interest to their happiness and welfare, humbly and respectfully lay before you this expression of their feelings and apprehensions.

Relieved from the miseries of slavery, many of us by your aid, possessing the benefits which industry and integrity in this pros¬perous country assure to all its inhabitants, enjoying the rich bless¬ings of religion, by opportunities of worshiping the only true God, under the light of Christianity, each of us according to his under¬standing; and having afforded to us and to our children the means of education and improvement; we have no wish to separate from our present homes, for any purpose whatever. Contented with our present situation and condition we are not desirous of increasing their prosperity, but by honest efforts and by the use of those oppor¬tunities for their improvement, which the constitution and laws allow to all. It is therefore with painful solicitude, and sorrowing regret, we have seen a plan for colonizing the free people of colour of the United States on the coast of Africa, brought forward under the auspices and sanction of gentlemen whose names give value to all they recommend, and who certainly are among the wisest, the best, and the most benevolent of men, in this great nation.

If the plan of colonizing is intended for our benefit and those who now promote it, will never seek our injury; we humbly and respectfully urge that it is not asked for by us; nor will it be required by any circumstances, in our present or future condition; as long as we shall be permitted to share the protection of the excellent laws, and just government which we now enjoy, in common with every individual of the community.

We therefore, a portion of those, who are objects of this plan, and among those whose happiness, with that of others of our colour, it is intended to promote, with humble and grateful acknowledg¬ments to those who have devised it, renounce, and disclaim every, connection with it, and respectfully but firmly declare our determination not to participate in any part of it.

If this plan of colonization now proposed is intended to provide a refuge and a dwelling for a portion of our brethren, who are now held in slavery in the south, we have other and stronger objections to it, and we entreat your consideration of them.

The ultimate and final abolition of slavery in the United States is, under the guidance and protection of a just God, progressing. Every year witnesses the release of numbers of the victims of oppression, and affords new and safe assurances that the freedom of all will in the end be accomplished. As they are thus, by degrees relieved from bondage, our brethren have opportunities for instruction and improvement; and thus they become in some measure fitted for their liberty.—Every year, many of us have restored to us by the gradual, but certain march of the cause of abolition—parents, from whom we have been long separated—wives and children, whom we had left in servitude—and brothers, in blood as well as in early sufferings, from whom we had be long parted.

But if the emancipation of our kindred shall, when the plan of colonization shall go into effect, be attended with transportation to a distant land, and shall be granted on no other condition; the consolation for our past sufferings and of those of our colour, who are in slavery, which have hitherto been, and under the present situation of things, would continue to be afforded to us and to them, will cease for ever. The cords, which now connect them with us will be stretched by the distance to which their ends will be carried until they break; and all the sources of happiness, which affection and connection, and blood bestow, will be ours or theirs no more.

Nor do we view the colonization of those who may become emancipated by its operation among our southern brethren, as capable of producing their happiness. Unprepared by education, and a knowledge of the truths of our blessed religion, for their new situation, those who will thus become colonists will themselves be surrounded by every suffering which can afflict the members of the human family.

Without arts, without habits of industry, and unaccustomed to provide by their own exertions and foresight for their wants, the colony will soon become the abode of every vice and the home of every misery. Soon will the light of Christianity, which now dawns among that section of our species, be shut out by the clouds of ignorance, and their day of life be closed, without the illuminations of the Gospel.

To those of our brethren who shall be left behind, there will be assured perpetual slavery and augmented sufferings.—Diminished in numbers the slave population of the southern states, which by its magnitude alarms its proprietors, will be easily secured. Those among their bondmen, who feel that they should be free, by rights which all mankind have from God and from nature, and who thus may become dangerous to the quiet of their masters, will be sent to the colony; and the tame and submissive will be retained, and subjected to increased rigour. Year after year will witness these means to assure safety and submission among their slaves; and the southern masters will colonize only those whom it may be dangerous to keep among them. The bondage of a large portion of our brethren will thus be rendered perpetual.

Should the anticipations of misery and want among the colonists, which with great deference we have submitted to your better judgment, be realized; to emancipate and transport to the colony, will be held forth by slave-holders as the worst and heaviest of punishments, and they will be threatened and successfully used to enforce increased submission to their wishes and subjection to their commands.

Nor ought the sufferings and sorrows, which must be produced by an exercise of the right to transport and colonize such only of their slaves as may be selected by the slave-holders escape the attention and consideration of those whom with all humility we now address. Parents will be torn from their children—husbands from their wives—brothers from brothers—and all the heart-rending agonies which were endured by our forefathers when they were dragged into bondage from Africa will be again renewed, and with increased anguish. The shores of America will like the sands of Africa be watered by the tears of those who will be left behind. Those who shall be carried away will roam childless, widowed, and alone, over the burning plains of Guinea.

Disclaiming, as we emphatically do, a wish or desire to interpose our opinions and feelings between all plans of colonization, and the judgment of those whose wisdom as far exceeds ours, as their situations are exalted above ours; We humbly, respectfully, and fervently entreat and beseech your disapprobation of the plan of colonization now offered by “the American society for colonizing the free people of colour in the United States.”—Here, in the city of Philadelphia, where the voice of the suffering sons of Africa was first heard; where was first commenced the work of abolition, on which Heaven hath smiled, for it could have had success only from the Great Maker; let not a purpose be assisted which will stay the cause of the entire abolition of slavery in the United States, and which may defeat it altogether; which proffers to those who do not ask for them what it calls benefits, but which they consider injuries; and which must insure to the multitudes whose prayers can only reach you through us, misery, and sufferings, and perpetual slavery.

BlackPast, B. (2007, January 24). (1817) J. Forten & Russel Perrott, “An Address To The Humane & Benevolent Inhabitants Of The City And County Of Philadelphia. BlackPast.org. https://www.blackpast.org/african-american-history/1817-j-forten-russel-perrott-address-humane-and-benevolent-inhabitants-city-and-county-philadelphia/

Minutes of the Proceedings of a Special Meeting of the Fifteenth American Convention… (Philadelphia, 1817), pp. 69-72.