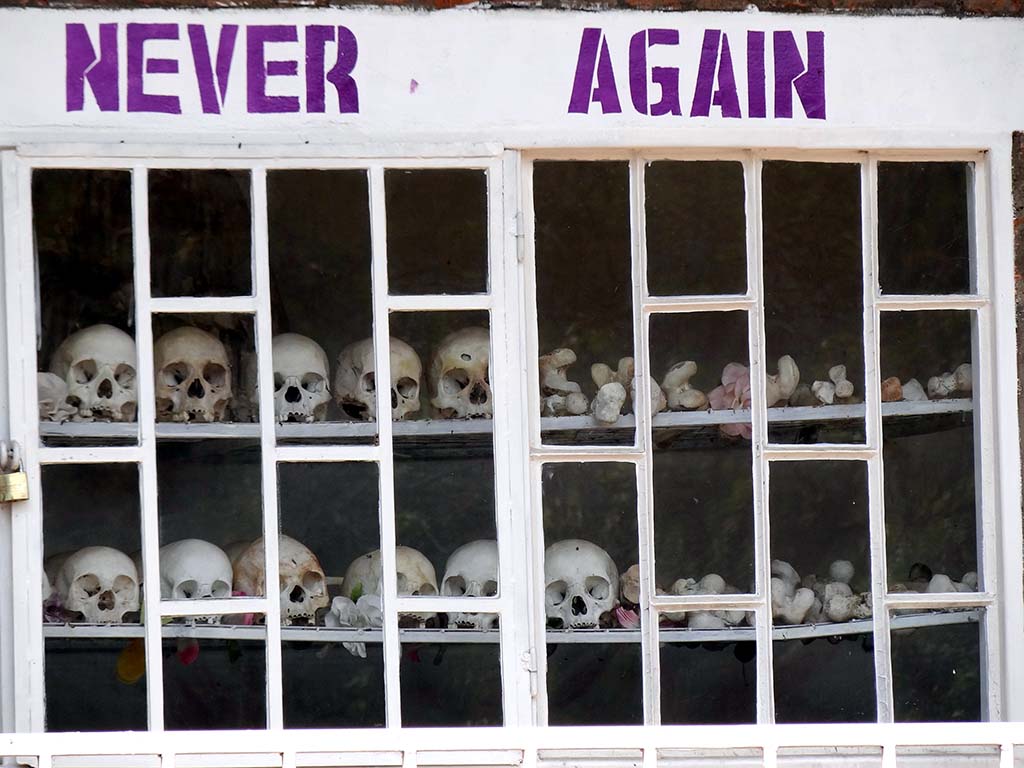 From April to July 1994 Rwanda suffered through a period of
government-sanctioned mass murder which resulted in the deaths of nearly
one million Tutsi men, women and children. Most observers point to
myriad factors which caused the slaughter including government
corruption, longstanding ethnic antagonism, the legacy of colonialism,
and competition for scarce farmland. Jean-Damascène Gasanabo, a citizen
of Rwanda whose parents and four siblings were killed during the
Genocide, offers another explanation, greed and jealousy. His account of
the Rwandan Genocide, written expressly for BlackPast.org, appears
below.

For centuries and even until today after the genocide, the three Rwandan
social groups have lived together, on same hills, dales, and flatlands.
Hutus, Tutsis, and Twas live together in every part of the country of
thousand hills. The relationship between the three groups was based on
everyday life. It is simplistic and naive to argue that the relationship
between the people was perfect and that conflicts arose as a result of
colonization only. No society exists that has avoided social conflicts
among its population. From the pre-colonial period to the 1994 genocide,
Rwanda has been characterized by internal conflicts. However, the
nature of these conflicts was different in each epoch. Before the
colonial period, the conflicts involved different clans such as the Bega and the Banyiginya in which both Hutus and Tutsis were represented. Those conflicts were related to the problems of land or power.

The 1994 genocide against Tutsis in Rwanda was the culmination of the
hate of Hutus towards Tutsis. It poses two main questions: the first on
the relationship between the two groups over centuries, and the second
concerns the origins of hate that led to the genocide.

Through the example of two neighboring families—a Hutu family, the
Bizimana family, and my Tutsi family, Kagabo family—this article
intends to show how the conflict between Hutus and Tutsis came about. I
will analyze the evolution of the relationship between these two
families from the pre-colonial period until 1994. This example reflects
the relationship between Hutus and Tutsis through most of Rwandan
history.

The Bizimana Hutu family and the Kagabo Tutsi family lived closely for
decades on Gihene Hill in the Kicukiro District, near Kigali, the
capital and largest city of Rwanda. Bizimana and my father, Kagabo, were
born in the 1930s, being almost the same age. The two men were farmers
and primary school teachers. They both cultivated their small farms and
both had cows. Their parents and grandparents lived in the same village
of Gihene. Bizimana and Kagabo attended the same primary and secondary
school and received certificates that allowed them to teach in primary
school.

The two families helped each other resolve problems they faced in their
daily lives. Children from both families looked after their parents’
respective cows and went together to fetch water at the spring or
firewood in the forest. At that time money was not an issue and
collaboration among neighbors was common in order to accomplish
substantial work in a short time. That work was called Ubudehe, the tradition of mutual assistance.

Ubudehe brought together members of the community to help each other in their daily lives. The Bizimana and Kagabo families used Ubudehe for activities requiring more effort or time than either family could individually afford. Through Ubudehe,
they built houses and cultivated beans or sorghum on much larger
acreage than a single family could manage. After the work, the families
shared banana wine or sorghum beer. In this way all houses were built
without architects and without money. My family, Bizimana’s family, and
other neighbors collaborated in building a community.

In the 1980s Ubudehe was institutionalized at the national level and was now called Umuganda
(literally meaning “contribution”). In Rwanda, every last Saturday of
the month, from 7:00am to noon, everyone was expected to participate in Umuganda, a form of unpaid community work. During Umuganda,
people cleaned up streets, cleared bushes around roads and waterways,
built small bridges, cut grass, and maintained public building such as
schools.  After the genocide Umuganda still continues and it
contributes to the sense of community and shared responsibility. It
forges unity and reconciliation in the country since it allows all
participants to come together for public service.

As a child, with my brothers and sisters, I used to play different games
with Bizimana’s children. I did not know that I was Tutsi or that my
friends were Hutus. We were just children and friends. While the parents
were drinking beer, discussing land or good grazing for cows, we
children played together, ate lunch or dinner, using our hands and
sharing the same plate. When my father was sick and unable to milk the
family cows, Bizimana would come over to our home to help milk the cow
because my mother could not milk cows since this was not a common work
for women. In the same way, my father would go to milk Bizimana’s cows
when for any reason Bizimana was unavaialable.

During the 1959 and 1960 mass killings against Tutsis, I was not born
yet, but I heard that Bizimana family protected my family,and also
provided food and water for sustenance. During the 1973 massacres I was a
young boy and I remember how some Hutus neighbors wanted to kill us,
but Bizimana protected my family. We considered them good friends for
decades.

I was almost the same age as Bizimana’s son, Rurangwa. We had grown up
together in the same village and had become close friends. Rurangwa and I
were in the same primary school and we both had his father and my
father as our teachers. We both passed the national examination for
entering into secondary school, but we did not attend the same boarding
school. At that time in Rwanda, many secondary school students attended
boarding schools and came home for holidays for two weeks at Christmas,
two weeks at Easter and two months for summer holidays in July and
August. I attended boarding school while Rurangwa went to school and
came back home everyday. For this reason, there was no longer much time
for us to spend together. After our secondary school graduation in 1988 I
left Rwanda to study in Europe. I now realize that my departure sowed
the seeds of jealousy and hatred toward my family.

In 1994 I was still in Europe studying when the genocide began in
Rwanda. Most of my extended family, my mother, father, two brothers and
two sisters were killed in the first week. The Bizimana family did not
hesitate–they were the first–to kill my family members, to take our
cows, and to steal items in our house. I cannot understand, even today,
this turnaround. How could a family who was very close to us, suddenly
kill us? What was the reason for this sudden atrocity?

In 1996 two years after the genocide, I went back to Rwanda and visited
what was left of my family home. Bizimana’s house was 20 meters from
ours and I went to see him and ask for news regarding the genocide. Our
house was destroyed and I saw its doors and windows lying on the floor
of his living room. I asked him why doors and windows of our house were
in his house and he said that he brought them to his house because he
wanted to save them for us when the Hutu militia destroyed our house. I
was not convinced by his explanations because of the hesitation in his
voice. When I asked him who destroyed our house, he replied that people
who destroyed our house came from far away and he did not know them.
Still I found his answer hard to believe that truly he didn’t know
people who destroyed our house. Throughout the country, Tutsis were
killed by their neighbors and their belongings were stolen or destroyed
by people they knew. From informal inquiry with other neighbors, I
learned that Bizimana’s son (Rurangwa who was my close friend as we were
growing up) participated in the killing of my father and my mother, but
Bizimana refused to confirm it. I asked him where his son was and the
answer was that he had died of HIV/AIDS.

I spent time making some investigations on how my father, my mother, two
brothers and two sisters were killed. I learned that when they were
killed, the bodies were thrown in the bush or in latrines. I also
learned that another neighbor who was living 80 meters from our house
killed one of my sisters, Marie-Claire. I went to see the family and
asked how my sister died. The lady, without looking at me, confessed
that her husband had killed my sister. After hiding some days in the
bush, Marie-Claire went to that house around 7:00 pm to ask for water to
drink. The man of the family saw her and immediately killed her instead
of offering her the much needed water to quench her scorching thirst.
In response to my question as to why he killed her, she said that it was
because she was Tutsi, nothing else. She then informed me that her
husband died in 1995 in a Hutu refugee camp in the Democratic Republic
of the Congo.

The story of my family and the Bizimana illustrates how the Rwandan
genocide was carried out. Tutsis were killed by their Hutu neighbors,
the people with whom they had shared the joys and sorrows of everyday
life. The fact that neighbors killed neighbors explains the high number
of deaths in a such short period of four months only.

The 1994 genocide against Tutsis was methodically planned and was a
success for the perpetrators. However, there were survivors saved by
their Hutu friends. Other Tutsis like myself who were outside of Rwanda
during the genocide also survived. Neither the Hutu militias or the
roving bands of Hutu farmers and townspeople could exterminate all
Tutsis just as the Nazis could not exterminate all Jews. Now the time has
come to build a new Rwanda where Hutus, Tutsis and Twas must live
together in mutual respect. The reconciliation process has started with
the Rwandan tradition jurisdictions called “Gacaca”. The habitants from
the same village meet to discuss and debate what they saw and heard
during the 1994 genocide. The debates brings opportunities to talk, to
listen to each other, to hear the killers and the victims stories during
the genocide. The Gacaca help to understand and measure the
responsibility of each individual in the village. Thus, the inhabitants
in the village have the opportunity to share their griefs, pains,
hopes, and vision of the future cohabitation. The main result of the
Gacaca jurisdictions is for having given a space to people where they
could speak freely and without any pressure. The Gacaca allows some
people falsely accused to be released from the prison and others who are
guilty to be taken to the court and to the prison. While Gacaca lends
justice to both survivors and perpetrators, in some parts of the country
some survivors are afraid to testify against perpetrators for the fear
of being persecuted or killed. Unfortunately in some cases, those who
testify against the perpetrators suffer death at the hand of the accused
perpetrators or their families.

We are all Rwandans and Rwanda belongs to all of its citizens whether
Tutsis, Hutus, or Twas. This should be the motto of every Rwandan.