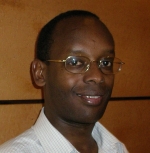 Jean-Damascène Gasanabo has a Ph.D. in Education from the University of Geneva, Switzerland (2004) and is the author of a doctoral thesis pertaining to the analysis of history textbooks and the construction of exclusive identities in Rwanda from 1962 to 1994.  After his doctorate, he worked with UNESCO in Paris as a Consultant in Education Sector for the project “Fostering Peaceful Co-Existence through Analysis and Revision of History Curricula and School Textbooks in South-Eastern Europe” (2005-2006) as well as collaborating as a Programme Specialist for “The United Nations Secretary-General’s Study on Violence against Children” (2006). From October 2006 to August 2008, he was Head of Support for Communication, Research and Special Projects at Geneva Call, an international humanitarian organisation. He is now back to UNESCO Headquarters in Paris as a Consultant in the Sector of Education for the projects “Education for Holocaust Remembrance” and “Prevention of school related gender-based violence in post-conflict countries: from African case studies to international cooperation” as well as in the Sector of Social and Human Sciences where he is responsible for producing Policy Briefs for the Management of Social Transformations (MOST) Programme.

Situated over several hills and valleys, Kigali is the capital city of Rwanda and is home to the main administrative and commercial centres of the nation as well as over one million people. In pre-colonial times Mount Kigali was a site of magical renewal overseen … END_OF_DOCUMENT_TOKEN_TO_BE_REPLACED

On October 21, 1945, Madame Eugénie Tell Eboué, the widow of Félix Eboué, former Governor General of French Equatorial Africa, became the first woman of African descent to be elected to the French National Assembly in Paris.  Born Eugénie Tell on November 23, 1891 in … END_OF_DOCUMENT_TOKEN_TO_BE_REPLACED

The Brazzaville Conference was organized during the Second World War and took place in Brazzaville, the capital city of the colony of French Equatorial Africa from January 30 to February 8, 1944.  The Conference was sponsored by the French Committee of the National Liberation (CFLN). … END_OF_DOCUMENT_TOKEN_TO_BE_REPLACED

Never Again, Rwandan Genocide Skulls on Display “Image Ownership: Public Domain” From April to July 1994 Rwanda suffered through a period of government-sanctioned mass murder which resulted in the deaths of nearly one million Tutsi men, women and children. Most observers point to myriad factors … END_OF_DOCUMENT_TOKEN_TO_BE_REPLACED