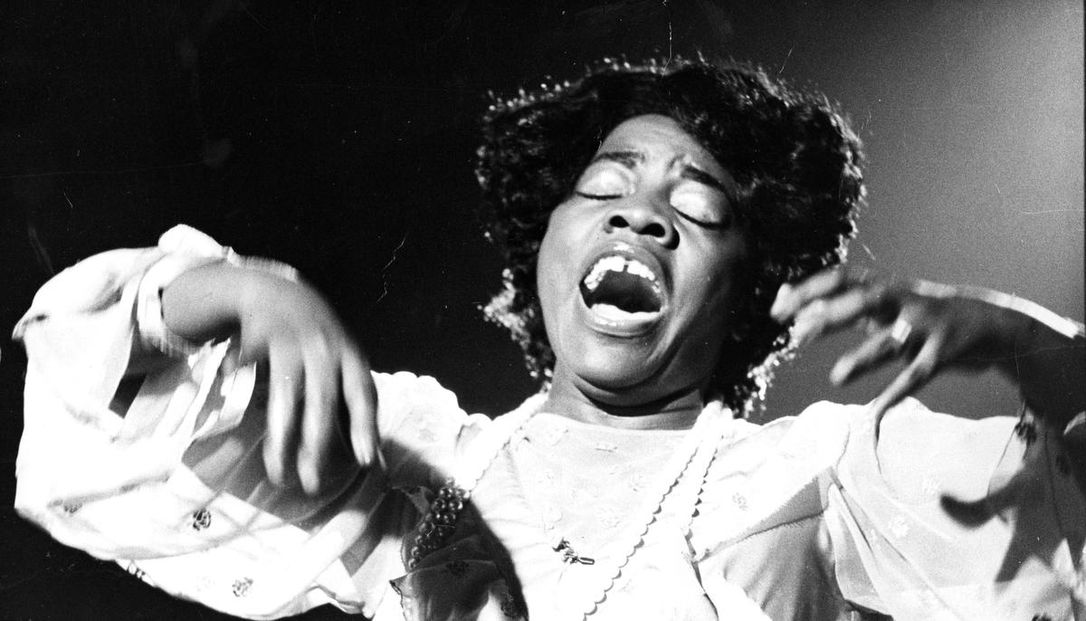 Salome Bey was an American-born, Grammy-nominated singer, songwriter, and actress who, after emigrating to Toronto, became known as “Canada’s first lady of the blues.” Salome Wideman was born in Newark, New Jersey, on October 10, 1933, to Andrew and Victoria Wideman. Her father was a devoted student of the African diaspora who, after converting to Islam, changed his family’s surname to Bey. Salome and her eight siblings grew up learning prayers in Arabic and fasting during Ramadan. When Bey was 14, she and her sisters sneaked out of the house and performed at an “Amateur Night” at the Apollo Theater in Harlem, where they won the night’s contest. Bey attended Arts High School, the famed performing arts school in Newark whose graduates include jazz greats Sarah Vaughn and Wayne Shorter. As a young woman, Bey joined her brother Andy and sister Geraldine, and they toured North America and Europe as the vocal group Andy and the Bey Sisters. The trio became regulars at the Blue Note in Paris.

In 1961, the group made its first appearance in Toronto, Ontario, and Bey moved there permanently in 1964. That year, she married Howard Berkeley Matthews, a restaurateur who owned The Underground Railroad, a restaurant and nightclub that served as a meeting place for the city’s Black community. The couple raised two daughters, Jacintha Tuku and Saidah Baba Talibah, and one son, Marcus Matthews.

Bey became a fixture of Canada’s jazz and blues club circuit. She also worked in theater, starring in the 1971 musical Justine, for which she won an Obie Award when it moved to Off Broadway (where it was renamed Love Me, Love My Children). Bey next appeared on Broadway in leading roles in Dude and Don’t Bother Me, I Can’t Cope. She earned a Grammy nomination in 1976 for the cast album of Your Arms Too Short to Box with God, a Broadway play based on the Biblical book of Matthew.

In 1978, Bey wrote and starred in Indigo, a cabaret show on the history of the blues, that had an all-Black cast and crew. The show played to sold-out crowds for over a year and won two Dora Mavor Moore Awards, an honor presented annually by the Toronto Alliance for the Performing Arts. Indigo was widely credited with breaking ground for Black theater performers in Canada. Bey played leading roles in Shimmytime, a revue about the singer and actress Ethel Waters, and Madame Gertrude, about the blues singer Ma Rainey.

Bey released five jazz, blues, and gospel albums and numerous singles from 1970 to 1995, including live recordings from the Montreux Jazz Festival. In her later years, she appeared onstage with her daughters, both of whom became vocalists and songwriters. In 1996, Bey received the Martin Luther King, Jr. Award for lifetime achievement from the Black Theatre Workshop of Montreal, and in 2005 she was made an honorary member of the Order of Canada, the nation’s second highest civilian honor.

Salome Bey suffered from dementia in the final years of her life and died at a long-term care center in Toronto on August 8, 2020, at the age of 86.