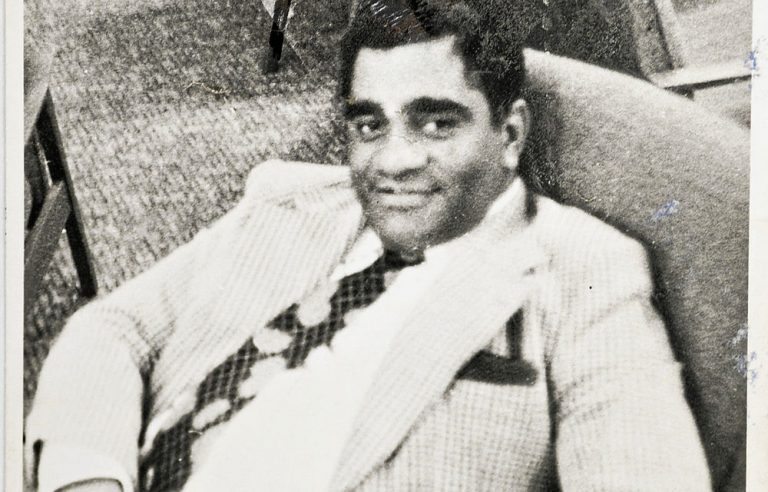 The novelist Richard Moore Rive was born March 1, 1931 in Cape Town, South Africa.  His mother was Nancy Rive, a black South African woman and his father was Richardson Moore, an African-American ship hand.  Moore abandoned his newly born son, Richard, a few months after he was born, never to be seen again.

Richard Moore Rive grew up in a tenement building called Eaton Place in Cape Town’s impoverished black neighborhood, District Six.  He was raised by his mother and several half siblings, particularly his half sister Georgina Rive.  Rive was also raised Catholic and baptized at the St. Mark’s church in District Six, though he later became an atheist as an adult.

Rive attended primary school at St. Mark’s.  At age 12, his high marks earned him a municipal scholarship to the prestigious Trafalgar High School.  Along with his studies Rive found time to enjoy hiking and sport, and won several prizes for athletics in amateur competitions.

After completing High School in 1947, Rive worked for a short time as a clerk in a business called Phil Morkel.  In 1950, he decided to register at Hewat College of Education to train as a High School English teacher.  He completed this education in 1951 and found employment at Vasco High School.  After only one year at Vasco, Rive was offered a position at the prestigious South Peninsula High School.  He taught there for almost two decades, and eventually became the head of the English Department and an athletics coach and administrator.

While still teaching full time, Rive enrolled at the University of Cape Town in 1952 to pursue a B.A. in English.  Due to his teaching and coaching obligations, he did not complete this degree until 1962.  He finished his first novel, Emergency, that same year, and it was published in 1964.  A protest against apartheid, Emergency was written about the Sharpeville crisis and was quickly banned by the South African government.  His 1963 publication of short stories titled African Songs was also very popular, featuring another famous anti-apartheid story titled “The Bench.”

In 1965, Rive was awarded a Fulbright Scholarship and traveled to America to study African and African-American literature at Columbia University.  He completed his Master’s degree in literature at Columbia in 1966 and went on to pursue a Doctorate of the Arts at Oxford University in England.  His doctoral research was on Olive Schreiner, a South African like Rive, and an author and political activist as well.  In 1974, Richard Moore Rive earned his PhD. with a doctoral thesis on Schreiner, which would be published in 1996, several years after his death.

Rive’s other works include Selected Writings (1977), his autobiography, Writing Black (1981), Advance, Retreat (1983), “Buckingham Palace,” District Six (1989), and the sequel to his first novel, Emergency Continued (1990).  His final novel, Emergency Continued was completed two weeks before his death on June 4, 1989, when he was stabbed to death in his home in Cape Town.  A play production of “Buckingham Palace,” District Six was performed posthumously in 1989 in his honor.