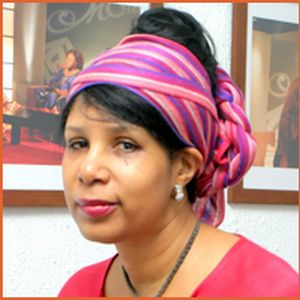 Karen Ann King-Aribisala is a Guyanese-born novelist who was raised and currently resides in Nigeria. She left Guyana as a young child, moving with her parents to Nigeria around the time of the Nigerian Civil war (1967-1970).  Her father introduced her to books at an early age, and the two would discuss literature, poetry and the Bible. He encouraged her to write as well, and she began composing her own stories around the age of eight.

Karen King-Aribisala began her education at the Ibadan International School in Nigeria. She received an international education in Guyana, Barbados, Italy and at the London Academy for the Dramatic Arts in England. She met her Nigerian husband during her time studying abroad in Italy as a teenager.

King-Aribisala’s first book of short stories Our Wife and Other Stories (1991) won the Commonwealth Writer’s Prize for Best First Book, Africa Region. In 2008 her third book, Hangman’s Game, won another Commonwealth Writer’s Prize for Best Book. Her most popular work to date, Hangman’s Game observes parallels in the slavery imposed by General Sani Abacha’s military regime in 1980s Nigeria and the conditions that led to the Demerara Slave Revolt in 1823 Guyana.

King-Aribisala has published several short stories in literary journals including Wasafiri, Presence Africaine, The Griot and Bim. Her novel Kicking Tongues was published in 1988. She is the recipient of several awards and grants, including two James Michener Fellowships for Creative Writing at the University of Miami in Florida, a Ford Foundation Grant, British Council Grants, and a grant from the Goethe Institute. She lives with her husband in Nigeria where she is a professor of English at the University of Lagos.