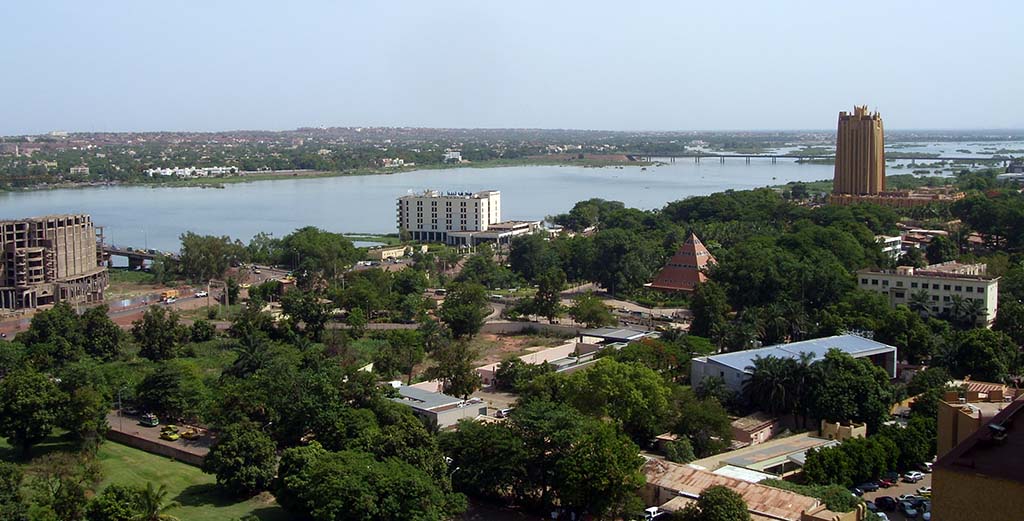 Bamako, with a population of 1.8 million, is the largest city in the Republic of Mali. It serves as Mali’s seat of government and the country’s economic and cultural center. The city is located in the southwestern corner of Mali, along the banks of the Niger River.  In the Bambara language Bamako means “crocodile river.” Bamako is connected to other major parts of Mali via the Niger River. Although it first came into prominence as an urban center in the Mali Empire, the precise date of its founding is unknown.

From the 11th through the 16th centuries people throughout the Mali Empire traveled to Bamako to study Islam. At one point Bamako rivaled the more famous Timbuktu as a seat of learning.  Bamako diminished both in size and importance after the collapse of the Mali Empire.

Mungo Park, a Scottish explorer with the British African Association, visited Bamako in 1797 and in 1806, becoming the first European in modern times to enter the city. In 1806 Park estimated Bamako to have a population of 6,000 people, but towards the end of the century the city had become a settlement of a few hundred inhabitants.

In 1883 the French gained control of the city, which now had a population of about 1,000.  They built a fort there that year and in 1908 made Bamako the capital of the French Soudan Colony. In 1923 the French completed a railroad connecting Bamako with Dakar, Senegal.

As a colonial capital, Bamako ironically emerged as a center of anti-colonial activity. With the intent of ending colonialism in Francophone Africa, in 1946 the Rassemblement Démocratique Africain (RDA) was established in Bamako. The RDA became the first French-speaking Pan-African organization in the world.  By 1957, Modibo Keita, the mayor of Bamako, was named leader of the RDA.

With independence in 1960 the French Soudan renamed itself the “Republic of Mali.” Modibo Keita became the country’s first president. As people relocated to the city to escape famine and poverty in the countryside Bamako’s population increased tremendously over the next four decades.

In addition to being the political hub of Mali, Bamako is the economic and cultural center of Mali as well as its capital.  Products from the countryside such as gold, rice, cotton, livestock, and kola nuts are transported to the city and packaged for international trade and domestic consumption. The city also manufactures textiles, ceramics, and pharmaceuticals for local consumption.  Bamako is home to many notable institutions such as the University of Bamako, the National Museum of Mali, the Mali National Zoo, the Grand Mosque of Bamako, and the Bamako-Senou International Airport.

The buildings of Bamako have a unique architectural style.  Bamako’s largest building is the BCEAO Tower, which houses the Mali branch of the Central Bank of West African States. Combining modern building techniques with local indigenous aesthetics, the tower is classified as Neo-Sudanic in design.