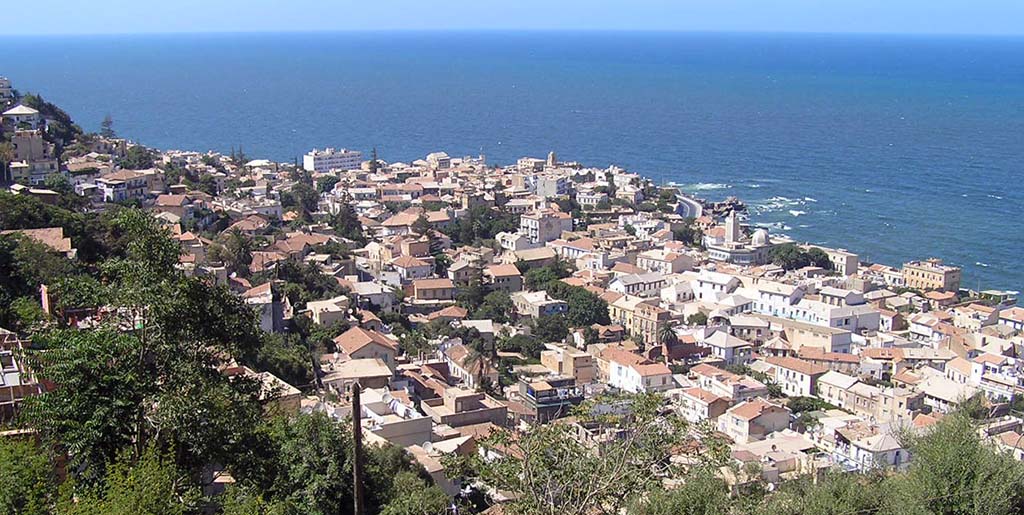 Algiers, the capital city of Algeria, lies along the northwestern edge of a large bay in the Mediterranean Sea. The largest city in Algeria, Algiers has served as a principal seaport as well as a commercial, cultural, and political center for the country.

The Phoenicians, who created a small trading colony, gave it the name Ikosin. The area was renamed Icosium by the Romans, who occupied the area from 300 BC – 100 AD. At various points, it was controlled or conquered by Berbers, Vandals, Byzantines, and Arabs. The city reappeared in historical accounts after the mid-tenth century when Bulukkin, a Fatimid emir of Berber origin, established a trade center. He is recognized by many as the founder of Algiers, which he named Al-Jaza’ir Bani Mazghanna (“islands of the sons of Mazghanna”).

Algiers, long under the shifting powers of foreign invaders, broke from this pattern in the early sixteen century, when Andalusian Muslims and Jews fleeing the Reconquista in Spain arrived to its shores. When the Spanish came in pursuit, the city’s Muslims sought protection from Turkish corsairs who had control of an eastern port, Jijel. By 1529, the Spanish were driven out, having lost a strategic site for trade and piracy.

Ottoman rule brought the construction of mosques, monuments, and the Casbah (“citadel”), an infamous military palace. In the 1600s, the population of Algiers was around 100,000, with 30,000 additional Christian captives, the result of a thriving privateering trade primarily targeting Spanish transport. Piracy was banned a century later by European enforcement and the city began to concentrate on grain exportation.

By 1830, Algiers had been ravaged by plague, famine, and dwindling trade profits.

The Turkish military elite fled, along with a portion of the Muslim population. Their property was appropriated by the French, who also took control of religious endowments. Despite mass protest, the Katwaja Mosque was converted into a cathedral and the city’s covered market and its mosque were demolished and replaced. The Kasbah (Muslim neighborhoods) was spared, as was the New Mosque. Algiers’ infrastructure was transformed. Streets were widened, new buildings erected, the port improved, and a base of colonial administration established.

By 1954, the city had 600,000 residents, half of them European. The same year saw the beginning of the War of Independence, spurred by rural disparity and hardship. Large numbers began migrating to the capital from rural areas, pushing the demographics further in favor of the native population.

From 1956-1957, the National Liberation Front (FLN) conducted an urban guerilla war campaign against the occupation, taking around 1.5 million lives. When the French withdrew in 1962, the city had been ravaged by terrorism from both parties and sections of downtown Algiers were burned by settlers before they left.

Since independence, Algiers has become a vital Mediterranean shipping center. Its population stood at 1.5 million in 2011. Meanwhile, the city has dealt with numerous crises, including housing, infrastructure, unemployment, and civil unrest.