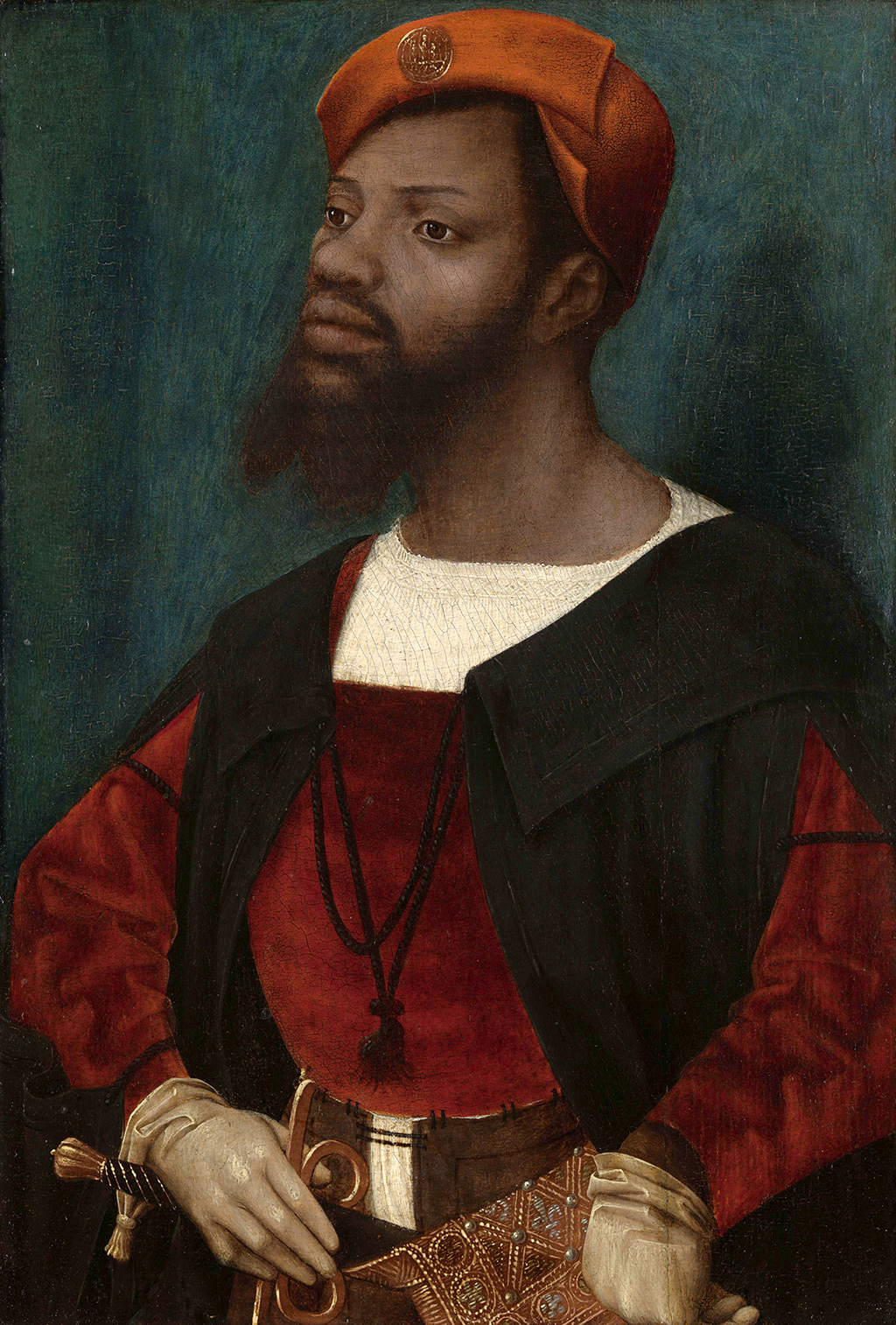 In the following account University of Cincinnati historian John K. Brackett describes the famous 16th Century painting of a black courtier at the court of Margaret of Austria, the Duchess of Savoy and Governor of the Habsburg Netherlands.  The name and rank of this courtier remains a mystery.  Professor Brackett, however, speculates on the possible African origins of the elegantly dressed nobleman.

The striking portrait to the right of a black African man dressed in the rich garb of a courtier, his visage composed and dignified, his elegantly gloved right had resting on the handle of his sword identifies him as a member of a court. It is a shame that at this point the contour of his figure is all that we know about this sixteenth century black man. Some context will at least bring us closer to knowing more about the particular individual who sat for Mostaert’s now famous Portrait of a Moor.

Jan Mostaert was born in the city of Haarlem in the Low Countries in about 1475, dying in 1555/1556. He was born into a noble family but we know little else about him. The Netherlands was home to a sophisticated group of artists who began experimenting with their own imaginative style of realism separate from Italian artists of the Renaissance. Part of this group, much of Jan’s work was destroyed in a fire in 1576; some other paintings once attributed to him are now assigned to a contemporary, Adriaen Isenbrant.  Mostaert very much looked and acted the part of the handsome, educated, well-mannered Low Countries nobleman.

These qualities and his artistic talents and interests attracted the attention of Margaret of Austria, daughter of Maximilian I, Holy Roman Emperor, and Mary, Duchess of Burgundy. Born in 1480, she died on December 1,1530 in the Low Countries. Margaret was a participant in and patron of the arts, selecting Mostaert as her court portraitist in 1518. She served twice as Governor of the Habsburg Netherlands, the first time from 1507 to 1515, then from 1519 to 1530, the last being the bookend dates for the execution of the portrait. The Netherlands was a very rich territory which provided large revenues for the Habsburgs but it was also beset with religious problems in the age of the Reformation. Both Catholics and Protestants lived there which made ruling it a delicate undertaking. Margaret was an excellent administrator. She was also the recipient of a fine humanist education; her court at Mechelen (between Antwerp and Brussels, both in Belgium) was visited by many of the literary elite at that time.

Mostaert accompanied Margaret on many of her travels and painted many portraits of her courtiers. She displayed a great interest in the objects and people coming to Europe as a result of the European voyages of discovery, extending her wide range of tastes to the ethnic make-up of her court. The figure in Mostaert’s Portrait of a Moor is thought to be a member of her own court or of the court of her nephew, Charles V, the Holy Roman emperor. The man wears rich clothes, gloves, and holds a sword, all indicative of his high status. The insignia on his hat and bag allude to possible Spanish or Portuguese origins; Margaret and Charles both had deep connections to those courts, Charles as Holy Roman Emperor, Margaret his aunt, briefly married into the Spanish court. The Moor’s ethnic origins are West or Central African.

Given that Spain and Portugal, or often Italians sailing with a Spanish or Portuguese license, were dealing in slaves, first in Senegal, and up the Gambia River, with the Wolof and Mandinka, and also that the Portuguese were deeply involved with the kingdom of Kongo (in the area of modern Angola), this man could be either Wolof or Congolese which were distinct African cultural groups. There were a number of Wolofs in Iberia, who had come over from Africa with the Islamic invasions and settlements ending in the eight century, but they had already been Islamized. John Thornton, a leading historian of the Kongo Kingdom, argues that there are three cultural zones in West Africa. The first is Upper Guinea, covering an area extending from the Senegal River down to the area just south of Cape Mount in modern Liberia. This area includes the Wolof region. The second zone was what Europeans called Lower Guinea, stretching from the lagoons of Cote d’Ivoire roughly to Cameroon, where the dominant language family is Kwa. The Angola coast stretching inland as far as the Lunda Empire of Shaba in modern Congo was the third zone. The dominant languages there were Kimbundu and Kikongo. The Kingdom of Kongo was part of this third zone.

There were significant cultural differences between Senegambians and Angolans (including the Kongolese), that kept them from cooperating, for example, in a planned slave uprising in 1656 on the West Indian island of Guadeloupe. For obvious reasons, I only want to put a finger into the waters of physical ethnic differences. It is not easy to distinguish different cultural groups in West Africa on that basis. In the sixteenth century, West Africans, like Europeans were shorter people, but Africans were generally thinner, their physiques often positively remarked upon by early travelers from Europe.  Judging however from his robust physical appearance, and the shape of his face, an educated guess would make the Moor more likely a Kongolese than a Wolof, who were/are a slimmer people. In addition, the Wolof were already Muslim converts at this time, whereas the Bakongo converted to Catholicism in the late 15th century. The Moor pictured is clearly a Christian.

The Kingdom of Kongo, was established along the lower Congo River near the coast of West Africa and in contact with Portugal from the time that the explorer, Diogo Cão, reached the mouth of the Congo River in 1482. In April 1491 a large party of Portuguese soldiers, missionaries, and laborers worked their way peacefully towards the capital, Mbanza Kongo, now São Salvador in Angola. From that point the history of Kongo became intertwined with the development of the Atlantic World, and eventually with the course of the Atlantic slave trade in that part of Africa. The kings of Kongo quickly accepted Catholicism after 1482, even taking the names of Portuguese kings for themselves and their heirs.

Nobles of the Bakongo began travelling to Portugal as early as 1485, to meet and mingle with the court of the king of Portugal. King Nzinga a Nkuwu received baptism in May of 1491, taking the name of João (John).The reign of his son as King Nzinga Mbemba Afonso (1506-1543) is of interest to us. Though not likely the subject, his son’s story is instructive. Before he himself became a king, Afonso sent his son, Henrique (ca. 1495-ca.1526), along with other sons of noble Bakongo families to receive their educations in Lisbon at the College of Elói.

Henrique became the first African bishop of the Catholic Church. He was by far the best student of those who came to study at Elói. After fifteen years of study in Lisbon as an excellent student in Latin and Theology, Afonso, on the advice of King Manuel  l of Portugal (1495-1521), sent an embassy of Henrique as well as some Portuguese clerics of noble families, to Rome in March 1514 to request a dispensation from Pope Leo X that would allow Henrique to be made a bishop. At nineteen he was below the officially required age of thirty to be eligible for appointment to the office. Nonetheless, Leo granted the dispensation. Henrique then returned to Lisbon as Bishop of Utica (near ancient Carthage in North Africa) but never went there.  He remained in Lisbon until 1521, when he returned to Kongo as its bishop. The clergy, and bishops among them, were the highest order of Portuguese society.

Since Henrique was a man of the cloth rather than of the sword by the estimated period of Mostaert’s execution of the Portrait of a Moor, he was not likely the subject, although he would have been the best known African at court.  But, I would argue that Henrique’s story demonstrates that Bakongo nobles were treated as honored equals at the Portuguese court at this time. Mostaert’s portrait then is arguably of a Bakongo noble.