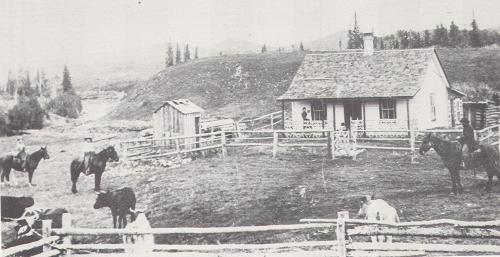 In the following article Canadian independent historian Gael Greene examines the arrival of black emigrants from Oklahoma in the Canadian provinces of Alberta and Saskatchewan.  These pioneer settlers carved out communities on one of the last frontiers in North America.

Many Canadians feel pride about their country’s role in the operation of the Underground Railroad, a well known part of racial history in North America. The secret anti-slavery network helped nearly fifteen thousand African Americans flee their bondage in the United States for freedom in Eastern Canada.

A lesser known African American migration occurred in the early decades of the 20th century, from Oklahoma to the Canadian prairies. During this period of time approximately one thousand black men, women and children attempted to build new lives for themselves in Alberta and Saskatchewan. Although black settlers actually came to Alberta and Saskatchewan in relatively small numbers, their history in the provinces is a unique and courageous one.

Between 1897 and 1911, Clifford Sifton, Canadian Minister of the Interior, actively promoted immigration to Western Canada. When he offered land to prospective immigrants from Europe and the United States, African Americans from Oklahoma enthusiastically responded. Sifton advertised that an immigrant farmer would be given title to a quarter section of land (160 acres) for just $10, if he stayed on the land for three years and improved it by clearing, planting and building a house. This offer was a powerful incentive for the Oklahoma blacks, who at the time were suffering racial discriminatory policies in Oklahoma and were often unable to purchase farms.

This chronicle of migration to Western Canada begins in the years following the Civil War, when Southern whites stepped up their campaign of brutality against newly freed blacks. Desperate to flee the south many African Americans headed west to the new Indian Territory, an area that would later become the State of Oklahoma. All Black towns grew in Indian Territory when the former slaves settled together to live free from the prejudices and brutality they had suffered in the South. All-black settlements also offered the advantage of being able to depend on neighbours for assistance and the beginning of economic advancement, self-help and racial solidarity. Unfortunately, an influx of white settlers into Oklahoma at the same time meant that blacks soon faced the same violence and restrictions they had hoped to leave behind in the South.

With the coming of statehood in 1907, the new Oklahoma State legislature immediately passed a succession of restrictive acts mandating segregated railroad cars, streetcars and schools.  Blacks challenged these new segregation laws in the courts and organized other forms of protests, some of which were violent. They also fought unsuccessfully against a grandfather clause that prohibited them from voting. With disfranchisement and discrimination in Oklahoma seemingly permanent, it is understandable why many of them looked north to Canada for what they hoped would be peace, freedom, and security.

The African Americans who crossed into Canada faced the usual obstacles and trials associated with pioneer farming. The most daunting was clearing the land while facing the harsh Canadian climate. Many newcomers, accustomed to the warm climate of the American South, were ill-prepared for long Canadian winters.  They also had to adjust to new farming patterns.  In Oklahoma, farmers might get two or three crops from a vegetable garden per year; in Canada they were able to grow only one. However, wild game was plentiful and helped many settlers survive hard winters.

Regrettably, entrenched white racial attitudes were a far greater obstacle than clearing the land and surviving the winter. The influx of white Canadian settlers brought their understanding of race relations with them from Europe or from the United States. Many of the new white and Indian neighbours were as unprepared to treat them as equals as had been white Americans. As a result the black newcomers usually chose to settle together in rather isolated locations, possibly to minimize contact with whites. There were other reasons for staying together, a number of the families were related, and had been members of the same church congregations in Oklahoma. Other African American families had come from all black or largely black areas and knew the value of group settlement as a defence against white racism. Once located on their land the African American families worked hard to transform bush and meadow into productive farms. They had to learn new ways of working the land, making the transition from cotton farming to raising grain and livestock.

Between 1910 and 1914, during the largest exodus of blacks from Oklahoma, politicians and organizations such as the Edmonton Board of Trade and the Imperial Order of the Daughters of the Empire (IODE) spearheaded campaigns to keep blacks out of Alberta. A petition was drafted and sent to Ottawa which stated “It is a matter of common knowledge that it has been proven in the United States that negroes and whites can not live in proximity without the occurrence of revolting lawlessness and the development of bitter race hatred.”  It went on to state that United States had a Negro problem and these petition signers urged the Government of Canada to take steps to avoid similar problems by banning the further immigration of African Americans into Western Canada.

The Canadian government never proposed any direct legislation against black immigrants for fear of tainting its public image or damaging its relationship with the United States. It was noted that a section of the Canadian Immigration Act of 1910 gave the government the power, with an order-in-council, to exclude for a period or permanently, any race thought unsuitable to Canada’s climate. While simultaneously trying to encourage migration of American whites, and discouraging the deemed “undesirables” from undertaking the journey north, the Minister of the Interior took a further drastic step to restrict migration. On May 31, 1911 Clifford Sifton sent a recommendation to Prime Minister Sir Wilfred Laurier, for an order-in-council barring blacks from entering Canada for a period of one year. The order-in-council read: “For a period of one year from and after the date hereof the landing in Canada shall be and the same is prohibited of any immigrants belonging to the Negro race, which is deemed unsuitable to the climate and requirements of Canada.”

This order-in-council was repealed a few months later, but its approval indicated the Canadian government’s commitment to keeping the northern plains “white.” Canadian authorities also instituted rigorous medical examinations to screen and delay black entrants to the nation. Some immigrants to Alberta had to undergo further screening upon arrival in Edmonton, the provincial capital, where local health officials were instructed to find reasons to deport them. In an effort to spread negative propaganda among prospective black immigrants, a black medical doctor from Chicago, G.W. Miller was hired by the Canadian government to go to Oklahoma to prevent applicants from emigrating. Miller was successful in his assigned duties, convincing many Oklahoma blacks that they could not prosper in Canada’s cold climate. These informal policies were effective, and by 1914, black immigration to Canada had all but ended.

No one could remove the black settlers who had already arrived, and several black communities survived and even thrived on the cold Canadian prairies. In Saskatchewan the largest black settlement was located in Eldon, a site north of Maidstone. In 1912 the settlement, which was made up of twelve families, built the Shiloh Baptist Church, a one-room building constructed of dovetailed, hand-hewn square poplar logs hauled by ox cart from the North Saskatchewan riverbank. These settlers became known as the “Shiloh People” for the tiny church in which they worshipped.  Joe Mayes became the first preacher of the new congregation and in 1913 the first funeral was held in the little cemetery next to the church. All that remains of Saskatchewan’s black settlement is the log church and the lovely cemetery stippled with simple white crosses that stand as mute evidence of the struggles and sacrifices of those courageous pioneers.