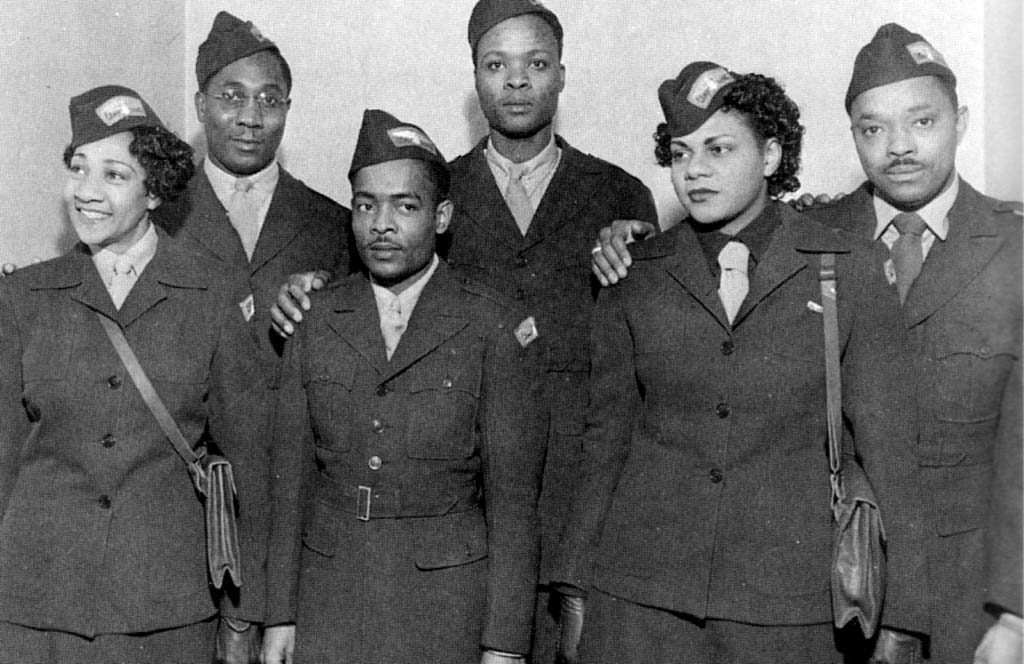 In the following article independent historian Charles Kastner describes the 1944-1945 tour of Alberta Hunter and the Rhythm Rascals who became the first black USO performing unit to Visit the China-Burma-India Theater of World War II.

The China-Burma-India (CBI) Theater of World War Two, was an often forgotten part of this global conflict. In 1944, most of Burma was still under the control of the Japanese. From bases in then British India, the U.S. Army Air Force attacked targets in Burma and Thailand before General William Slim and his British 14th Army began a successful push to drive the Japanese out of Burma in the winter and spring of 1945. Other American Army units were building the Ledo Road, which would allow supplies to flow over land from India to China. In this theater, black construction units helped build the road and other units served in support roles in India. All told, about ten to twelve percent of the troops in the CBI were African American. These troops longed for news and entertainment from home.

The USO tried to boost morale by sending troupes of African American entertainers to all the combat theaters during the war. The first black USO troupe in the CBI (Unit 342) arrived in India on October 4, 1944, for a tour of India and Burma. Known as the Rhythm Rascals, the unit was under the direction of the legendary blues singer Alberta Hunter. Hunter was an international star, having spent most of the 1930’s performing in Paris, London, and Copenhagen. In London she stared as Queenie in a production of Showboat with Paul Robeson. The other members of the troupe included singer and dancer Mae Gaddy, trumpeter Joe “Taps” Miller, and a musical trio from Chicago called “The Three Rascals,” which included Ollie Crawford on guitar, Leonard Caston on the piano and guitar, and Alfred Elkin on bass.

On tour, USO entertainers wore uniforms and were supposed to receive the same treatment and respect due an army captain. On a few occasions, the unit was refused service in an officers’ mess and told to eat in the kitchen. Hunter had no patience for racial slights. When this occurred, she refused to eat and protested these insults up the chain of command. Alberta saved her army issued metal food tray for the rest of her life as a remainder of the discrimination she faced in the CBI.

Unit 342 performed at hospitals, air bases, and in forward combat areas where they entertained thousands of troops. In one six day stretch in January 1945, the Rascals performed at four Army Air Force bases in northeast India, including Pandaveswar, which was home to the 7th Bomb Group that flew bombing missions deep into Burma and Thailand. There the Rascals entertained about three thousand troops who gave them a thunderous applause, but not everyone in the Army was enthralled by unit’s show. Mae Gaddy drew the irk of some of the top brass for one dance that a military chaplain claimed “was practically a ‘striptease’” but the troops love it and the show went on.

The Rascals then moved into the forward combat areas in Burma. They often donned parachutes and strapped themselves into the bucket seats of cargo planes to get there. The Rascals risked their lives to perform in these forward areas. One night, as the air raid sirens wailed, the cast members grabbed their helmets and jumped into foxholes dug outside of their tents–except for Ollie Crawford who, being a sound sleeper, was not roused by the alarm. Mae Gaddy jumped out of her foxhole, ran to his tent, and shook him awake just as first bullets began to fly. He dove into a foxhole and slowly came to his senses. Alberta Hunter found her foxhole too small for her liking so she ran over to a deeper one and hunkered down until the attack was over. No one was injured in the attack but the Japanese succeeded in blowing up the base mess hall.

The small size of the unit allowed the Rascals to perform in isolated bases where other larger USO troupes could not go, such as the one on Hill 60. The base was so dangerous that the unit had to perform in the back of a flatbed truck with a few soldiers on the ground pointing flashlights up at them for lighting in an impromptu night performance. In these small isolated bases, the men were extremely grateful for a chance to forgot the war that raged around them. Many soldiers came up to the performers with tears in their eyes, often hugging them after thanking them for risking their lives to put on a show.

The unit returned to United States on March 31, 1945, after six months in the CBI, where they had put on hundreds of shows for thousands of homesick GI’s. But this would not be the end of overseas duty for Alberta Hunter and her Rhythm Rascals. In early May, the unit shipped out for Europe as Unit 556, with the exception of Taps Miller, who was replaced by the female trumpeter Geneva Taylor Scott, who went by the stage name Jean Starr.

The unit arrived in Paris shortly after Germany’s surrender and began entertaining home bound and occupation troops. In a town outside of Paris, Hunter heard a white American but French speaking soldier making disparaging remarks about the Rascals to a Frenchman. Hunter went up to the man and asked him to repeat what the solider had told him. He replied that he had not understood what the soldier had said. Hunter, who spoke French, told the man that “you’re a damn liar,” and reported the soldier to his commanding officer. The word was soon out that Miss Hunter would not who tolerate any derogatory comments made about her or her entertainers. The incident was soon forgotten when Hunter received an urgent message from Supreme Headquarters Allied Expeditionary Force (SHAEF) in Frankfurt, Germany. She told the unit, “Y’all get ready because we’re going to entertain Mr. Eisenhower.”

At this time, many Hollywood stars were in Europe to entertain the troops, including Mickey Rooney, Jack Benny, Sonja Henie and Marlene Dietrich. The Supreme Allied Commander, General Dwight Eisenhower could have had his pick of any of these stars, but he chose the Rascals to entertain his important guests. One cast member thought that “maybe he wanted to prove the point that we had black artists in the United States who could perform as well as anyone else.”

The Rascals gave a special performance to top allied commanders, including General Eisenhower, British commander Field Marshall Bernard Montgomery, and Soviet commander Marshall Georgi K. Zhukov and their staffs. One newspaper noted that Eisenhower wined and dined his guests “but it took a Negro sextet from the United States to put the party in the groove.”

Hunter’s unit then toured Germany and Austria, entertaining troops and sightseeing as it went. The Rascals took time to visit Vienna and Berchtesgaden in Bavaria where they saw Hitler’s mountain home, the Eagle’s Nest. The Rhythm Rascals returned to New York on November 13, 1945, after entertaining troops in two war zones for more than a year.

Alberta Hunter loved her experience with the USO, telling a reporter shortly after her return that, “I’m going to be with Uncle Sam till he takes this uniform off me. I’ve never been so satisfied and had so much protection in my life. If you’re with the USA, everything jumps.” She remained true to her words. She led or participated in seven USO shows, include tours of occupied Japan and Korea, where she entertained frontline troops in 1952.

On April 20, 1946, at special ceremony at Ebbets Field in Brooklyn, forty USO entertainers received the Asiatic-Pacific Campaign Ribbon for “outstanding service” during the war. Alberta Hunter was there in her camp show uniform to receive the honor, as well as Mae Gaddy and the three rascals. In this pre-game ceremony, claps and roars erupted from the crowd and continued “unabated,” wrote the Brooklyn Daily Eagle, “for fifteen minutes or so that the ceremony took place.” Hunter and her entertainers had received a fitting tribute for their service to the nation.