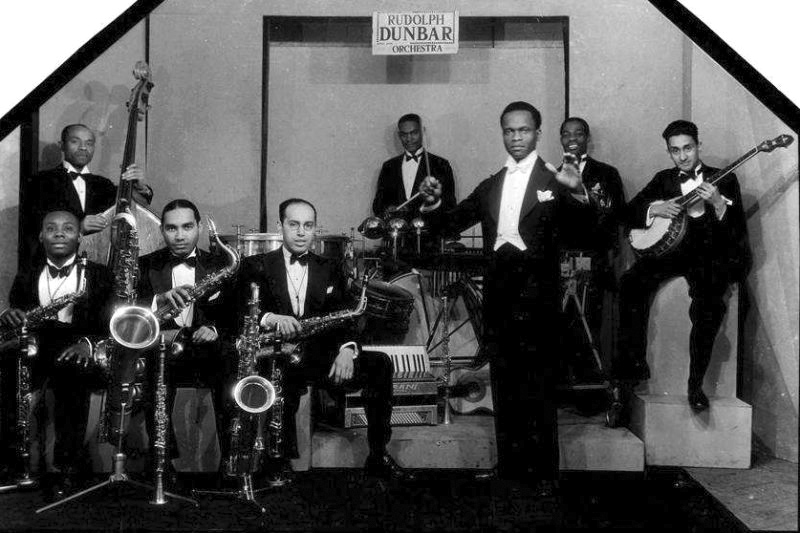 Rudolph Dunbar and his orchestra
Fair use image

Hear a soundtrack specially chosen to enhance your learning about W. Rudolph Dunbar (1907-1988)

Conductor, clarinetist, and composer W. Rudolph Dunbar was born on November 26, 1907, in Nabaclis, Guyana. At the age of nine, his musical genius apparent, he was invited to serve as a clarinetist in the British Guiana Militia Band. After a brief apprenticeship for stellar young Afro-Guyanese and Portuguese-Guyanese musicians, Dunbar performed with the Band until he was 13 years old. Over the course of his career, he became the first black man to conduct orchestras in England, Germany, Poland, and Russia.

Nineteen-year-old Dunbar left his native Guyana for New York City in 1926 to enroll in the Institute of Musical Art, now called the Juilliard School. While studying at the Institute, he participated in the Harlem Renaissance’s music activities, working with leading composer William Grant Still. While working with other Renaissance musicians, Dunbar also developed as a Jazz musician.

After graduating from the Institute of Musical Art, in 1932 at the age of 24, Dunbar journeyed to Paris, France, where he continued to develop his musical craft as a soloist and arranger. He conducted ensembles and studied music composition and conducting at the University of Paris at the Sorbonne. In 1937, After six years in Paris, Dunbar continued his studies in Germany and Austria. He then moved to London, England to pursue opportunities as a composer and conductor. While in London he became involved in music journalism, writing a weekly column in London’s The Melody Maker. He later opened the Rudolph Dunbar School of Clarinet Playing in London and authored the music textbook, Treatise on Clarinet Playing (1939).

By the 1940s Dunbar was a sought-after composer and conductor. In 1942, he was invited to conduct the London Philharmonic Orchestra before an audience of 7,000 in the Royal Albert Hall, becoming the first black person to hold that honor. Three years later, while working as a war correspondent for the American 8th Army, he was invited by Berlin Philharmonic musical director Leo Brochard to conduct William Grant Still’s Symphony No. 1 in A-flat Major, Afro-American for Allied soldiers in Germany. The concert took place in Allied-occupied Germany on April 12 during the final weeks of the Nazi regime. Dunbar also conducted French symphony orchestras in the late 1940s. In 1951, Dunbar was invited back to Guyana to conduct the British Guiana Militia Band. It was a huge celebration as he returned to lead the band that had first recognized his genius.

By 1962, Dunbar has conducted symphony orchestras and string ensembles throughout Europe, including Poland and the Soviet Union, making him the first Black conductor to enjoy this type of notoriety across that continent. In the USSR he led the Leningrad Philharmonic, the Moscow State Symphony Orchestra, and the Baku Philharmonic in Krasnodar, North Caucasus.

Dunbar was what would now be called Afrocentric in his approach. He always promoted and performed the music of Black composers. He also used his influence to highlight classical music pieces that honored African and Caribbean countries as they evolved from colonial rule to independence in the 1950s, 1960s, and 1970s.