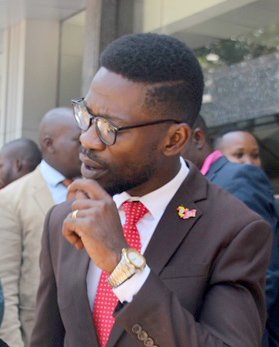 Bobi Wine was born on February 12, 1982, in Nkozi, Uganda. He grew up in the Kamwekya slums in the northeast part of Kampala, Uganda, and attended Kitante Hill Senior Secondary School, located in Kitante, a Kampala neighborhood. He attained his Uganda Certificate of Education in 1996 and later attended Kololo Senior Secondary School in Kampala. He received a Uganda Advanced Certificate of Education in 1998.

Bobi Wine entered Makerere University in Kampala, Uganda, in 1998, where he studied music, dance, and drama. He graduated in 2003. Wine’s music career started in the early 2000s. The main genres of his music are reggae, dancehall, and afrobeat. He had many popular music singles, including “Akagoman,” “Funtala,” and “Sunda.” He led the band Fire Base Crew until the group was disbanded in 2007. Afterward, he started a group called the Ghetto Republic of Uganda. Wine has released more than 70 songs. He also had a film career in local Ugandan movies, such as Cleopatra Koheirwe’s 2010 drama Yogera, and he had a lead role in the 2019 film Situka with Hellen Lukoma.

In April 2017, 35-year-old Bobi Wine’s political career began when he announced his candidacy for the Ugandan Parliament in a by-election for Kyadondo County East constituency. He won the election by a wide margin, defeating two other candidates, Sitenda Sebalu of the ruling National Resistance Movement Party and Apollo Kantiniti of Forum for Democratic Change.

He soon became a target of the administration of President Yoweri Museveni.

On August 14, 2018, supporters of the independent candidate for parliament, Kassiano Wardri, attacked Museveni’s convoy in the northern town of Aru. Wine, an outspoken critic of Museveni, declared on social media that police at the same time had shot at his vehicle, killing his driver. Wine then endorsed Wardri’s candidacy against Museveni. The next day he was arrested for unlawful possession of firearms and incitement to violence. A Ugandan court dismissed those charges, but on August 23, he was arrested again. In this instance, the Ugandan State Prosecution withdrew the charges against him just before his trial began.

Wine was arrested a third time and charged with treason. He was released on bail and traveled to the United States for medical treatment for injuries he allegedly received while in custody.

On July 24, 2019, Wine announced that he would run for president in the 2021 general election. To promote his presidential bid, he joined the National Unity Platform Party. Wine faced President Museveni in the 2021 Ugandan General election. He lost to Museveni amid charges by his supporters of voter tampering and vote suppression. Despite his loss, Wine vowed to remain active in Ugandan politics.