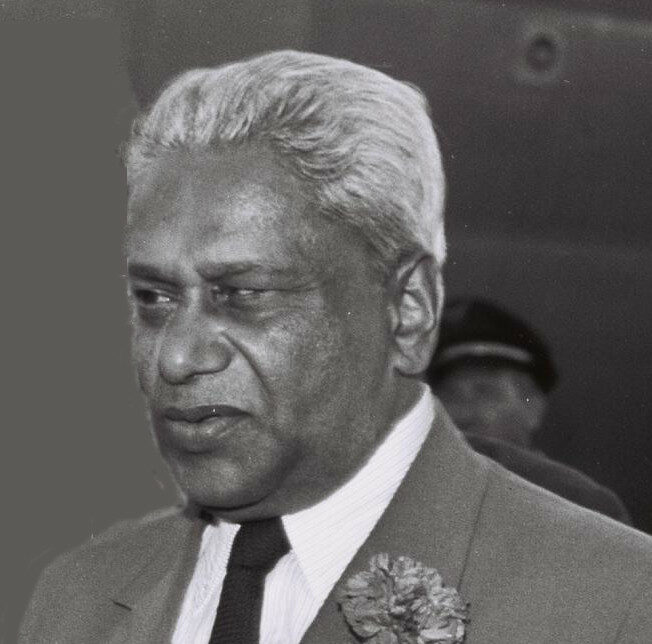 Seewoosagur Ramgoolam was the first Prime Minister of independent Mauritius. He was born on September 18, 1900, at Belle Rive, Flacq District, Mauritius which was then a British colony. His father, Moheeth Ramgoolam, had immigrated to Mauritius from India at the age of 18. He was an indentured servant and later overseer at La Queen Victoria Sugar Estate. Ramgoolam’s mother, Basmati Ramchurn, was born in Mauritius.

Ramgoolam’s father died when the boy was seven. He enrolled himself in school without his mother’s knowledge, attending first a Roman Catholic mission school and later the Bel Air Government school. At age of 12, he lost his left eye in an accident. Ramgoolam attended Junior Cambridge school at the Royal College in Curepipe, Mauritius. At the age of 21, he traveled to London to study medicine at University College. He also attended lectures at the London School of Economics.

While in London Ramgoolam spent much of his time at India House where he met future Indian leaders and intellectuals including Mohandas Gandhi, Jawaharlal Nehru, and the writer, Rabindranath Tagore. Ramgoolam was a founding member of the Indian Student’s Central Association in Knightsbridge, London. In 1924 he was elected President of the London branch of the Indian National Congress. He was also involved with the Fabian Society and influenced by their socialist economic and social policies.

In 1935 Ramgoolam returned to Mauritius and the following year he helped organize the Mauritius Labour Party which promoted voting rights and worker’s rights. In 1937 the colonial government gave the right to vote in local elections to Mauritians over the age of 21 who could sign their names.

Between 1940 and 1953 Ramgoolam held various local political offices including Municipal Councillor, and Mayor of Port Louis, Mauritius’s capital. In preparation for independence, he served at various times as Secretary of the Treasury, Minister of Finance, and Chief Minister in the colonial administration. In 1965 he was knighted by Queen Elizabeth II.

On March 12, 1968, Mauritius became independent with Sir Seewoosagur Ramgoolam as its first Prime Minister. Between 1968 and 1982 he served as Prime Minister in a series of coalition governments. During his tenure, the government instituted free universal education, built several hospitals, and organized a health care service. Village councils were established for local governance. Social security and pension systems were established, and housing expanded.

In the election of 1982, Ramgoolam’s party was defeated, and he resigned as Prime Minister. As a beloved national hero, he was appointed Governor General and served in this largely ceremonial post from 1983 to 1985.

Ramgoolam is revered in Mauritius. The international airport, national hospital, medical college, and a botanical garden are all named in his honor. Ramgoolam married Sushil in 1939. They had two children: Navin and Sunita. Navin served as Prime Minister of Mauritius from 1995 to 2000 and again from 2005 to 2014.

Seewoosagur Ramgoolam died at the age of 85 on December 15, 1985, in Port Louis, Mauritius.