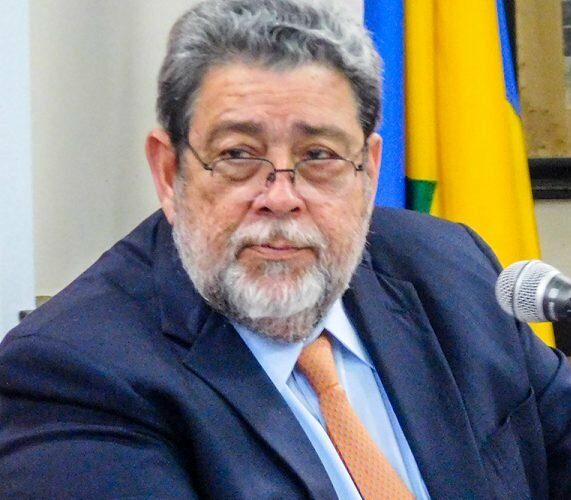 Ralph Everard Gonsalves or “Uncle Ralph,” also known as “Comrade Ralph,” is the Prime Minister of St. Vincent and the Grenadines and leader of the Unity Labour Party (ULP). Gonsalves became Prime Minister after his party won a majority in government at the 2001 general election. He is currently in his fourth term and his 15th year in office.

Ralph Everard Gonsalves was born on August 8, 1946, to Alban Gonsalves (a farmer and businessman) and Theresa Francis (a businesswoman) in Colonarie, a rural village in St. Vincent and the Grenadines. His ancestors came to St. Vincent and the Grenadines in 1845 as indentured servants from the Portuguese-ruled island of Madeira, which lies about 300 kilometers off the northwest coast of Morocco in northwest Africa.

Dr. Gonsalves received his education in St. Vincent and the Grenadines at the Colonarie Roman Catholic School and the St Vincent Boys’ Grammar School. He later completed a bachelor’s degree in Economics at the University of the West Indies, where he received several notable awards, including President of the Debating Society and President of the Guild of Undergraduates. In 1971, he earned a master’s degree in government from the University of the West Indies. In 1974 and 1981, he earned a doctorate in government and a law degree from the University of Manchester, England, and Grey’s Inn, London, respectively.

In 1994, Gonsalves became deputy political leader of the Unity Labour Party (ULP). The ULP was an amalgamation of St. Vincent and the Grenadines Labour Party and the Movement for National Unity (MNU). Following the resignation of Vincent Beache, Gonsalves took over as party leader in 1998 and led the party to victory in the general election on March 28, 2001. Since then, he has been Prime Minister of St. Vincent and the Grenadines, winning the elections again in 2005, 2010, and 2015. Now in his fourth term and 15th year in office, Gonsalves is one of the longest-serving heads of government in the world.

Concurrent with his political career and prior to becoming Prime Minister of St Vincent and the Grenadines, Gonsalves practiced law before the Eastern Caribbean Supreme Court in a variety of matters, particularly in the areas of constitutional law, criminal law, administrative law, matrimonial law, real estate law, tort law in general and contract law. Dr. Gonsalves has researched, written, and published on a range of topics relating to the Caribbean, Africa, the trade union movement, comparative political economy, and economic development issues.

On Thursday, August 5, 2021, Gonsalves was attacked with a projectile near the entrance to parliament during a large demonstration against compulsory COVID-19 vaccination and mask-wearing organized by the nurses and police unions. He suffered significant injuries to his head in the attack but survived.

Gonsalves has been married twice and is currently married to Eloise Harris. He has two sons, Camillo, and Adam, from his first marriage and a son, Storm, and two daughters, Isis, and Soleil, from his second marriage.