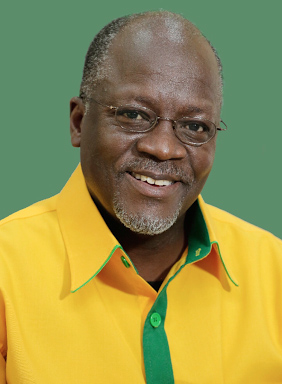 John Pombe Joseph Magufuli was a politician who served as the fifth President of Tanzania from 2015 to 2021. Magufuli was born on October 29, 1959, in Chato, Tanganyika (now Tanzania), to John Joseph Magufuli and an unnamed mother. Growing up, Magufuli attended the Chato Primary School from 1967 to 1974. He also attended the Kateke Seminary School from 1975 to 1977, then relocated to Lake Secondary School in 1977, graduating in 1978. Magufuli graduated from Mkwawa High School in Iringa, Tanzania in 1981. After graduating, Magufuli enrolled in the Mkwawa College of Education where in 1985 he received a Diploma in Education Science, majoring in Chemistry, Mathematics, and Education. Magufuli also attended the University of Dar es Salaam where he earned a Bachelor of Science in Education degree in 1988, a master’s degree there in 1994, and doctorate in chemistry in 2009.

Magufuli began his professional career as a teacher at The Sengerema Secondary School in Sengerema, Tanzania. He later quit his teaching job and became an industrial chemist at the Nyanza Cooperative Union Limited. While there he was elected as a Member of Parliament (MP) in 1995, where he represented the Chato district. He was appointed Deputy Minister for Works during his first term as MP by President Benjamin Mkapa. Magufuli would become Minister for Works following the 2000 election.

On January 4, 2006, President Jakaya Mrisho Kilkwete moved Magufuli to Minister of Lands and Human Settlement. He also served as Minister of Livestock and Fisheries from 2008 to 2010 and Minister of Works from 2010 to 2015.

On July 12, 2015, Magufuli was nominated as CCM’S (Chama Cha Mapinduzi) Presidential candidate for the 2015 election. Magufuli won a majority vote in the final round of the primary against Asha-Rose Migiro and Amina Salum Ali. Magufuli then faced candidate Edward Lowassa in the Presidential election held on October 25, 2015. On October 29, 2015, Magufuli was declared the winner by the National Electoral Commission (NEC). His running mate, Samia Suluhu Hassan, was declared vice president. During his presidency, Magufuli took on many issues but he was most notable for his measures to curb unnecessary government spending including cutting unnecessary foreign travel by government officials. Magufuli also reduced his own presidential salary from $15,000 to $4,000 a month. Magufuli presidency was not without its controversies. These controversies included being accusing of having autocratic tendencies seen in restrictions on freedom of speech, restrictions on LGBT rights, and a crackdown on members of the political opposition. He was also known of promoting misinformation about COVID-19 over the pandemic in Tanzania.

Magufuli won reelection against Tundu Lissu in the 2020 Tanzanian general election. On March 17, 2021, Magufuli died at the Emilio Mzena Memorial Hospital in Dar es Salaam, Tanzania at the age of 61. Magufuli’s cause of death was not known, but according to his vice president Suluhu, he suffered from a heart condition for many years. On March 20, 2021, Magufuli was laid-in-state at Uhuru Stadium in Dar es Salaam, Tanzania. Magufuli was at one time married to Janeth Magufuli. The couple had three children together.