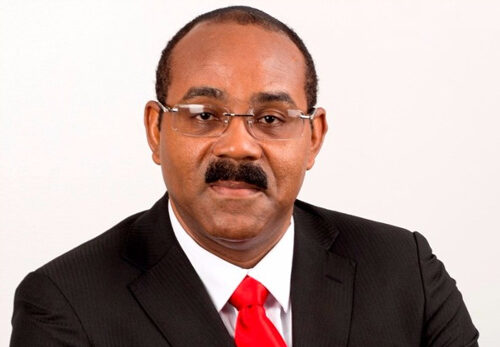 Gaston Alfonso Browne is the Prime Minister of Antigua and Barbuda. He has been at the helm of the country since 2014. Before entering politics, he was a banker and businessman.

Gaston Alphonso Browne was born in Antigua on February 9, 1967. As a child, he lived on Greys Farm with his paternal great-grandmother, who was born in 1894. She was then in her eighties, partially blind, poor, and old. After her death, he grew up in Point, the second child of a poor, at times unemployed, single mother who struggled tirelessly to provide him and his siblings with the basic necessities.

Browne attended Villa Primary School, Princess Margaret School, Antigua State University, City Banking University (UK), and the University of Manchester (UK). Browne has a first degree in Banking, which he completed in record time in the top twenty out of several thousand students.

For the past eleven years, Browne has been a senior bank manager at Swiss American Banking Group, where he managed over $400 million in assets while serving as a Minister of Planning and Trade, and a Member of the Antigua and Barbuda Parliament. He is currently Chairman and Chief Executive Officer of a company involved in construction and land development. Mr. Browne has also been a director of several companies including LIAT Ltd (aviation), Antigua Pier Group Ltd (infrastructure development), and Community Motors Ltd (auto sales).

Browne’s motto is “serve and empower.” He believes in personal responsibility and is a passionate opponent of poverty. His successes at the constituency level include: An EC$30 million fisheries development center, the establishment of a sports, entertainment and recreation facility in Dredge Bay, an information and communication technology center in Point, a library, a computer center at Villa Primary School and an affordable housing project in Dredge Bay.

Under Browne’s leadership, the Antigua and Barbuda Labor Party (ABLP), returned to office in the June 12, 2014, general election after 10 years in opposition, winning 14 out of 17 seats. Browne was sworn in as Prime Minister on June 13, 2014. On March 21, 2018, Browne successfully led the ABLP to a second consecutive election victory. He was sworn in for a second term as Prime Minister on March 22, 2018.

Browne is married to Maria Bird-Browne, a niece of the second Prime Minister, Lester Bird. The couple has a son, Prince Gaston Browne, who is Browne’s fourth child, having had three children before his marriage. In September 2020, they had a second child, a daughter. Maria Bird-Browne, also a member of the ABLP, won a seat in the Parliament representing the St John’s Rural East constituency, in the March 2018 elections.