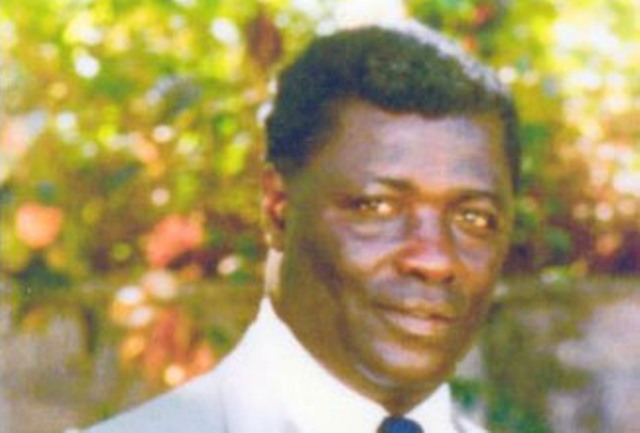 The Right Excellent Sir Simeon Daniel—teacher, lawyer, civic activist, Premier of Nevis and national hero—was born on August 22, 1934 at Barnes Ghaut Village in Saint Thomas Parish on the Island of Nevis, West Indies.  He was one of six children born to farmers Joseph (Job) Daniel and Melvina Archer Daniel.  At the age of seven Daniel lost his mother; his grandmother Augusta Mini Archer then cared for the children until his father married Alberta Skeete.

Daniel attended St. Thomas Government Elementary School and intended to become an Anglican Priest.  After elementary school, he enrolled as a Pupil Teacher and received the Leeward Islands Teachers Certificate in 1957. After taking continuing exams, he found a position at St. Thomas school where he studied for the Cambridge School Certificate and then traveled to Britain to continue his education.  Upon his arrival, he found a job at a suitcase factory and attended school in the evening.  Daniel excelled in history and British constitution studies, but his dreams of the priesthood were dashed when he failed religion.  Consequently, he studied, took the test for law, and was accepted at Holburn College of Law.  He passed the bar in 1966 and went to St. Kitts where he assumed the position of Assistant Secretary in the Ministry of External Affairs.  After being accepted to the local bar, he became the Crown Counsel in 1967, and served as the registrar of the Supreme Court and additional magistrate from 1968 to 1969.  Thus Daniel was introduced to government in this country of fewer than 60,000 residents, about 12,000 of whom lived on his home island of Nevis.

In 1969, Daniel attempted to purchase land in Nevis but was unable to secure a loan from a St. Kitts bank because of his meager government salary.  Consequently he entered the private practice of law to boost his income.  Eventually he became a successful practitioner and businessman and quickly emerged as one of the nation’s civic leaders.

Daniel was always interested in politics and, in 1970, helped organize the Nevis Reformation Party (NRP) which had formed in response to Federation government neglect of Nevis.  The two-island British Commonwealth Federation of St. Kitts and Nevis (whose head of State is Queen Elizabeth II of Great Britain) was politically dominated by the larger island of St. Kitts.  The NRP, which Daniel headed from 1972 to 1980, successfully contested for more representation in the National Assembly and more services for the smaller island.  Eventually, the People’s Action Movement (PAM), the opposition party on Saint Kitts formed a coalition with the NRP to gain political control of the Federation.  As a result Daniel served in the crucial positions of Minister of Finance and Minister of Nevis Affairs from 1980 to 1983. With a new power-sharing arrangement in place, Daniel became the first Premier of Nevis.  Two years later he established the Bank of Nevis Ltd., the island’s first bank.  By 2010 Daniel had retired but remained Senior Partner and Consultant for his firm, Daniel, Brantley & Associates, St. Kitts and Nevis.

Daniel received a number of awards and accolades including the Albert Einstein Bronze Medal for Peace in 1987, the International Order of Merit Medal in 2000, the Hands and Hearts for Nevis Award in 2004, and The International Biographic Centre Hall of Fame in 2005.

On May 27, 2012, 78-year-old Simeon Daniel died at his Nevis home after a long struggle with cancer.  On September 16, 2013, Daniel was proclaimed a National Hero by the Rt. Hon. Denzil L. Douglas, the Prime Minister of St. Kitts and Nevis.  He was only the second Nevisian to achieve National Hero status in the Federation’s history.