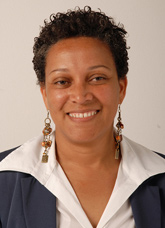 Politician and immigrant and women’s rights advocate Mercedes Lourdes Frias was born in the municipality of San Antonio de Guerra, Dominican Republic, on October 28, 1962.  The daughter of a stevedore and a washerwoman, she earned her degree in geography at the Autonomous University of Santo Domingo (UASD) and worked for several years in community development in rural and urban areas in Santo Domingo with special attention to women and Haitian immigrants.  Marriage in 1990 brought Frias to the Tuscan city of Prato, Italy (population 187,000) where she again focused on organizing women and immigrants and took on the responsibility for arranging ethnic diversity workshops in primary and high schools as part of her volunteer efforts.  She worked for three years for the Council of the Federation of Protestant Churches in Italy before her appointment in 2004 as Assessore (or councillor for equal opportunities) of Empoli, a city of 48,000 people in central Italy.

Frias’s volunteer work and political experience prepared her for the next step: a run for a seat in the Italian Parliament which she undertook in 2006 flying the banner of the country’s radical left Communist Refoundation Party, popularly known as PRC (Partito della Rifondazione Comunista).  Promising to support a guaranteed minimum wage and tax reform, she received more than 200,000 votes and was elected to the Chamber of Deputies (equivalent to the US House of Representatives), thus becoming the first person of African descent to sit in Italy’s Parliament.  Pledged to improve the lives of the country’s three million immigrants, Frias, as a member of Parliament, served on committees concerned with immigration and constitutional issues.  She also worked on legislation affecting the Roma and Sinti (gypsy) population and multicultural education.  Her high level political projects suffered a setback with the crushing defeat of the PRC in the spring 2008 election.  Failing to win reelection, Frias returned to her organizational work.

By 2012 Frias was founding president of a multiethnic group called Let the Word, which opposed “discrimination based on gender, geographic origin, cultural affiliation, nationality, and/ or sexual orientation.”  In 2013, as head of this pressure group, she met with Cécile Kyenge, the new Minister for Integration (and the country’s first black cabinet member) to devise a strategy to reverse anti immigration actions of Northern League (Lega Nord) politicians and the government of former Prime Minister Silvio Belusconi, particularly the imposition of a substantially increased surcharge on applicants seeking extended residency.

Separated from her husband since 1997, she has three children (one disabled with poliomyelitis) and lives in Campi Bisenzio, northwest of Florence.