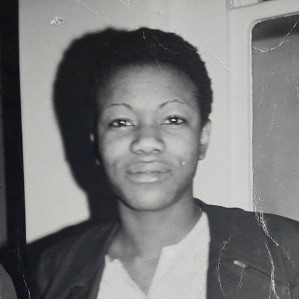 Olive Elaine Morris was a member of the British Black Panther Party and a grassroots activist in Great Britain. Morris was born in St. Catherine, Jamaica on June 26, 1952. Her parents migrated to post-World War II Great Britain while Morris and her siblings were left in the care of their grandmother in Jamaica. By the age of nine, Morris and her siblings migrated to Britain to re-join their parents in London. There Morris attended several schools including Tulse Hill Secondary School but left without graduating at 16 years old. She later enrolled at the London College of Printing to continue her education.

As a teenager, Morris she experienced racism in Britain including being racially profiled by London police. In 1969, 17-year-old Morris intervened in the arrest of a Nigerian diplomat for a parking offense. The police brutalized Morris and six other persons. She was also fined £10 and given a three-month suspended sentence for two years. While in custody, she was stripped and threatened with rape by London police. Morris utilized her experiences with London’s police to expose racism, sexism, and police brutality and to strengthen her political activism.

The Black Panther Youth League recruited Morris at 17 which furthered her activism. In 1973, Morris formed the Brixton Black Women’s Group (BBWG), to focus on women’s experiences in the Black Panther Party. Morris also played a significant role in the squatters’ rights campaigns in her Brixton community. She and other community activists squatted to help establish self-help community spaces including Sarbarr Bookshop, the first black self-help community bookshop in South London.

In 1975 Morris enrolled at Manchester University to earn a social science degree. At the University, she expanded her activism by working with the National Coordinating Committee of Overseas Students. And in 1977, she visited China and wrote an article, “A Sister’s Visit to China,” published in Speak Out!, the BBWG’s newsletter. Her article explored anti-imperialist struggles and self-help community strategies in the world’s most populous Marxist state.

In 1977 Morris returned from China, completed her degree and returned to her home-community in Brixton. In Brixton, Morris became a founding member of the Organisation for Women of African and Asian Descent (OWAAD), 1978-82, and edited the organization’s magazine FOWAD! During this time, she was diagnosed with non-Hodgkin’s lymphoma. On July 12, 1979, Morris died at the age of 27.

The now Brixton Service Centre located at 18 Brixton Hill was initially named ‘The Olive Morris House’ in 1986. At the time, it was uncommon in Great Britain to name a building after a black woman, especially a former member of the Black Panther Party. Despite the name change, the building is still known as and listed online as the “The Olive Morris House.” Inside the building is a plaque with Morris’s photograph and biography. Since 2009, the Lambeth Archives located at the Minet Library in South London has housed the Olive Morris Manuscript Collection. Today, through guided tours in Brixton, publications, and the 2011 Olive Memorial award to give bursaries to black women, Morris’s life and activism are kept alive for new generations.