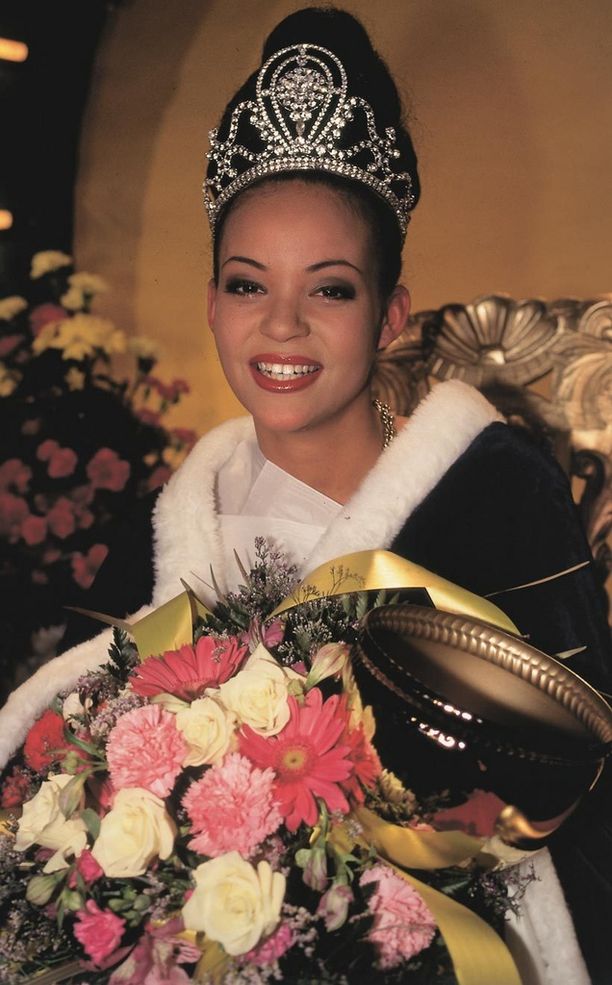 Eighteen-year-old Lola Odusoga was crowned Miss Finland in 1996 (Miss Suomi in Finnish). Her full maiden name is Iyabode Ololade (Lola) Remilekun Odusoga and she was born on June 30, 1977 in the coastal city of Åbo (Turku), Finland. Her father was born in Nigeria and her mother in Finland. The name “Ololade” means “The wealthy one has come” in Youruba. In her teens Lola was a competitive dancer.

At the same time she won the title of Miss Finland, Odusoga also won Miss Press and Favourite of the TV audience awards, showing that the decision taken by the jury judging the Miss Finland contest was popular. Following the Miss Finland title, Odusoga participated in the 1996 Miss Universe competition in Las Vegas, Nevada on May 17, where she was named second runner up. Odusoga was then crowned Miss Scandinavia in 1997. She is 174 cm tall and had a weight of 54 kg during her reign as Miss Finland.

Despite the fact that the jury decision was popular among the majority of Finns, there was a vocal minority who publicly objected to Odusoga being named Miss Finland.  Arguments like “a dark skinned girl with brown eyes should not represent the blonde Finnish people” began to appear in the Helsinki newspapers. The debate over her selection quickly spilled over into a more general but equally heated discussion of the definition of mulatto and of stereotyped characteristics of American, European, and African blacks.

Much of that debate was irrelevant since Lola Odusoga had lived all her life in Finland, spoke perfect Finnish, and had an upbringing just like any other Finnish child. Moreover, Lola’s personality, poise, and charm soon quieted the critics.  When she returned from the Miss Universe pageant public complaints about her being an unworthy Finnish representative came to an end.

After her year as Miss Finland, Odusoga’s popularity rose and she began to appear on numerous TV shows in Finland. She also modelled and did public relations work.  Her post-reign popularity generated complaints from Miss Finland 1997, Karita Maria Tuomola, who claimed that Odusoga overshadowed her during her subsequent reign.

Odusoga faded from the public’s attention until 2000 when she publicly announced that she would have breast implant surgery.